Dan Henderson: Now My Fans Can Watch Me for Free 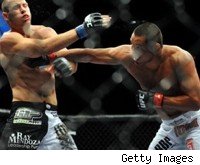 Dan Henderson made a major move in the mixed martial arts world on Monday, announcing that he's leaving the UFC to sign with Strikeforce.

Henderson's prolonged contract talks with the UFC were much discussed, and the UFC said he was asking for too much money. But in an interview with FanHouse, Henderson said money was only one of several factors that led him to switch. Others included his perception of a lack of respect from the UFC, his frustration that the UFC didn't plan to give him a title fight, and his excitement about fighting on network television.

Michael David Smith: Are you relieved that you can stop thinking about contract negotiations and start thinking about fighting again?
Dan Henderson: Yeah, it's nice to get that stuff done. And it's nice that I have a job now.

Is being on CBS a big part of it? And have they confirmed that your first fight will be on CBS?
Yes.

Have they given you a date or an opponent?
No, but I think my first fight will be in March or April on CBS and we'll work out an opponent soon.

Scott Coker said either Jake Shields for the middleweight title or Gegard Mousasi for the light heavyweight title. Which would you prefer?
I don't know which weight class I want to fight in quite yet but we'll figure that out some time in the next couple of weeks. Either way, both opponents are going to pose a good challenge for me, and I'm excited about fighting some of their top guys.

I know you were at the Strikeforce event in Chicago and you saw both Mousasi and Shields in person. What did you think?
Mousasi is very well-rounded, very comfortable on his feet and really calm and just great everywhere. I haven't seen him on his back a lot so I think that's where I might try to get him, but like I said, he's just very well rounded. He's somebody I think would be a great challenge.

It sounds like those two guys are sort of penciled in at the moment as your first two opponents, but do you think you could move up to heavyweight and fight Fedor Emelianenko?
I think that's an interesting fight and I'd love to do that. I don't think that would be my first fight in Strikeforce, but it's probably something we'll talk about after my first couple of fights.

You've already done a lot in this sport, having been the only person to hold titles in two weight classes simultaneously. But if you were to beat Fedor, that would completely change your legacy. Do you think about what kind of legacy you want to have in this sport when you're all done?
I don't worry about that. What I like is the challenge of it. What motivates me is challenges and I think Fedor would be the ultimate challenge. If I were to beat Fedor I think that would be the biggest accomplishment of my career, and Fedor is someone I truly believe in my heart I'm capable of beating.

You think you can beat Fedor?
Absolutely. Obviously, I'd have to craft just the right game plan, especially because I think he has a great style, he hits hard and he's not afraid to stand and bang and he's very good on the ground. And he has obviously shown that he can stay relaxed and calm. It would be a huge challenge but I think there's a good possibility that I'd beat him.

Back to the issue of fighting on CBS, how important is it to you to get network television exposure for your clothing company, Clinch Gear?
Well, anything is more exposure than being banned, and that's what the UFC did. So obviously I'll have more exposure for Clinch Gear in Strikeforce -- quite a bit more exposure. But that's not the deciding factor. It's just an added perk. There really was no one deciding factor, it was just a lot of things that have me more excited about fighting for Strikeforce. Another bit part of it was that I wasn't going to get the fight I wanted in the UFC.

So you're still disappointed that you weren't given the rematch with Anderson Silva?
Yes. It's something I definitely felt I deserved. And honestly, even if they had given the Silva fight to Nate Marquardt I would have been OK with that, because he's pretty much in the same boat as I am. But to give it to Vitor Belfort, a guy who hadn't fought at that weight? And a guy I'd beaten? [Henderson beat Belfort by unanimous decision in Pride in 2006.]

But that wasn't the determining factor, either. It was just everything combined. It just made a lot more sense for me to go to Strikeforce.

Is there a part of you that's sad that it didn't work out with the UFC? You fought in the UFC back in 1998 when the sport was new and then you came back after your time in Pride and had five good fights in the UFC. Do you wish it had worked out for you to stay?
Well, I thought I would probably end my career in the UFC, but things change and it didn't quite work out and I'll be fine where ever I am. And there's going to be a lot more eyes watching me on CBS than there would be on a UFC pay-per-view.

You haven't fought since UFC 100 and you were healthy and in shape and hoping to fight just a few months after that. Now you're looking at about eight months off. Do you wish you were fighting sooner than the spring?
Well, I had hoped I would fight around the Super Bowl, possibly in the UFC or possibly the week before in Strikeforce, but I'm OK with it. This gives me a little more time to get back into shape. I've been doing a lot of traveling and a lot of personal appearances and stuff and this will give me more time to get into shape.

I know you said wanting to fight on CBS was important and not getting the fight with Anderson Silva was disappointing, but how much of your decision was based on money?
It wasn't any one thing. It wasn't just the money, it wasn't just not getting the rematch with Silva. I felt like there could have been a lot more respect for what I'd done. I just felt like they didn't really care one way or the other whether I was there. I felt like they could have taken care of me a little better, but I have no hard feelings. I'm still going to be supporting the UFC, watching their fights. I'm a fan of fights and I won't quit being a UFC fan just because I'm not with them. I was watching the UFC when I was in Pride, too. No hard feelings and I'm a fan of MMA.

Dana White says he pushed you into signing with Strikeforce by lowering his initial offer. Is that true?
I don't think anything got lowered. I was committed to Strikeforce by the time I talked to Dana. Really, that has nothing to do with anything. Even if Dana had given me everything I asked for it would have been questionable whether I would have signed with the UFC.I don't even really want to talk about it.

Do you think you could ever fight in the UFC again?
I don't burn bridges. But whether I'm ever back in the UFC isn't a concern of mine. My concern is winning every fight in Strikeforce and making sure I'm exciting when I'm doing it, and there's not a bigger stage in MMA right now than being on CBS. To keep doing what I've been doing only do it now on CBS makes it all the better for me.

What do you want your fans to know?
Just that I appreciate their support along the way and I appreciate my fans being behind me no matter where I go. Hopefully I can keep entertaining them, just in a little bit different arena, and now they can watch me for free.