Couture vs. Coleman, Nogueira vs. Vera, Koscheck vs. Thiago 2 Set for UFC 109 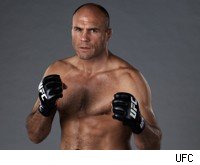 The UFC announced Tuesday five bouts for UFC 109 which will feature Randy Couture taking on Mark Coleman in a Hall of Famers matchup, Antonio Rogerio Nogueira versus Brandon Vera, a rematch between Josh Koscheck and Paulo Thiago, top middleweights Nate Marquardt facing Chael Sonnen and a bout between veterans in need of a win, Matt Serra vs. Frank Trigg.

UFC 109 takes place Feb. 6 at the Mandalay Bay Events Center in Las Vegas and will bring back event nicknames. Instead of simply naming the show after the main event, "Couture vs. Coleman," the event has been dubbed "Relentless."

Couture and Coleman is the first time two fighters are coming into the same fight as UFC Hall of Famers. It might also be the oldest matchup in UFC history. Couture is 46 and by the time the fight happens, Coleman will be 45.

Nogueira is coming off an impressive knockout win in his UFC debut at UFC 106 and he's being immediatedly tested against with an opponent in Vera. Vera lost a decision to Couture at UFC 105, but the general consesus believes Vera deserved the nod.

Thiago instantly became a top ranked fighter in his UFC debut in February with a first-round knockout over Koscheck. Koscheck felt the fight was stopped to early and he's been given a rematch to even the score.

Marquardt was offered to Dan Henderson as an opponent, but with Henderson heading to Strikeforce, Marquardt will fight Sonnen.

Serra, a former UFC welterweight champion, returns to action against Trigg in a fight that is expected to be a "loser leaves town" match.