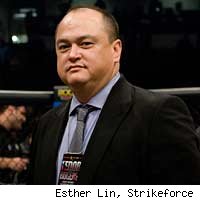 Strikeforce CEO Scott Coker says he expects Dan Henderson to fight for both the middleweight belt and the light heavyweight belt in 2010. He's just not sure which one will come first.

In an interview with FanHouse, Coker said he expects the newly signed Henderson, who was a champion in two weight classes in Pride and was last seen knocking out Michael Bisping at UFC 100, to have big fights against both Strikeforce middleweight champion Jake Shields and Strikeforce light heavyweight champion Gegard Mousasi. He also responded to criticisms from UFC President Dana White and talked about what's next for Fedor Emelianenko.
More: Hendo to Strikeforce | Dana White Responds

Michael David Smith: How long have you been working on getting Dan Henderson signed, and what happened to finally get it done on Monday?
Scott Coker: We've been going back and forth since mid-to-late-October. We met in Chicago and had a good conversation but that was more just getting to know you, not anything real specific. Things got serious just about four or five days ago. His agent said he wanted to do a deal with Strikeforce and I said, "Let's do it then."

When will we see him fight for Strikeforce?
Second quarter of next year.

Why not sooner?
Our January card in Miami is pretty much already full, and then February we don't want to go against the Olympics, so I think the best time is March or April or May. It happened so quickly over the last couple of days that we haven't had meetings about it with our matchmaker or anything like that. I just let Showtime know late [Sunday] night. But we're looking forward to putting Dan in the cage as soon as we can.

What role do Showtime and CBS have in negotiating to get a big-name fighter like Dan?
The first they heard that we were signing Dan was late [Sunday] night after it was done. They're important partners and we want them to be happy with the quality of the fights we're putting on, so we have a lot of dialogue with them about our match-ups and our fighters, but with a fighter like Dan we knew it wouldn't be an issue.

I think the best fight you can make is Henderson against your light heavyweight champion, Gegard Mousasi. Are you going to make that fight?
Dan said he'd let me know after Christmas what weight class he wants to start in. He and Gegard is a natural fight and he against Jake Shields for our middleweight title is a fight he would want.

So his first fight will be a title fight against your champion at either middleweight or light heavyweight?
I think so. He would like to fight in both weight classes.

Do you think he might win the belt in both weight classes?
It's a possibility.

He's done it before.
Yeah, I remember watching him knock out Wanderlei Silva to win his second title in Pride. That was one of the most exciting fights I've ever seen. Being there in person, it was amazing.

Will we see Henderson fight Fedor Emelianenko?
That's a question to ask Dan. Fedor's a pretty big guy. I'm sure Dan wants to challenge himself, but that's a pretty big move up in weight class.

We've heard that Henderson was asking for a lot of money. Is he now your highest-paid fighter?
No.

Is he your highest paid other than Fedor?
Fedor is the highest-paid athlete in Strikeforce. We have two other athletes who are getting paid as much as Dan, but I really can't say any more than that.

When he beat Michael Bisping at UFC 100 he made a $100,000 base salary, a $150,000 win bonus and a $100,000 knockout of the night bonus. Can he make more than $350,000 a fight in Strikeforce?
Well, I can't go into the details but there are a lot of things that are important to Dan. One is the compensation, but another was keeping his name and likeness rights, having access to intellectual property rights. But I'm almost getting too much into the deal, which I'm not supposed to because there are confidentiality agreements. The bottom line is that Dan wants to be treated fairly and with respect and we feel the same.

Dana White told my colleague Mike Chiappetta that signing Henderson will actually hurt Strikeforce because Henderson isn't a big enough draw to justify the money he's commanding. Is there any truth to that?
Well, I don't want to get into the whole Dana White thing. All I can say is, how often does a guy like Dan Henderson become available? He's a main event fighter. Every promotion would like to have Dan Henderson fight in a main event for them. Main event fighters are few and far between, and when you get a guy like Dan, who can contend for titles in two weight classes, it's a good day for Strikeforce.

Let me read you something else Dana White said: "They have too many fighters under contract and not enough events. They can't keep some of their obligations to fighters already. Either they're going to start breaching contracts or paying fighters not to fight. It'll take a lot more than one guy to help them. Their whole business model is f****d. They're coming after UFC? Yeah, OK." How do you respond to that?
Come on. I don't even want to respond to that. It doesn't deserve a response. I'm honored he's so concerned.

Overall, how are you feeling about this signing?
I really didn't know Dan before we started talking about this deal. I knew what an amazing athlete he is but I also really like him and I'm very excited to have him on our roster, and I think there are a lot of compelling match-ups for him here.

Let's talk about your December 19 card. How important is that card for continuing whatever momentum you've built from your CBS card?
I think it's important for us as a company to have great fights and great ratings. That's somewhat out of a promoter's control, but you put together the best match-ups you can and you hope the fights are great and you have great ratings. I think on that card the fans are going to have a great experience at the HP Pavilion and I think we've got great fights. Cung Le isn't our champion anymore but every time he fights it's a special occasion. And then we're showing fans some great fighters they maybe haven't seen before like King Mo and Jacare. Those are fighters we're excited to showcase.

Did you know when you scheduled the December 19 card that the WEC was going to have a fight card the same night?
We actually decided we'd do a show on that date about five months ago. I'm not sure when the WEC set their show but we don't try to counter-program anybody. That's not something we've done. We just do the best shows we can do.

You've got a card in Miami in late January. When will you be ready to announce some of those fights?
I hope to have some those fights announced by the end of the week but we don't like to jump the gun because the commission has to approve them first.

When will Strikeforce be back on CBS?
We're having dialogue with them now but hopefully the first quarter of next year.

Will Dan Henderson's debut be on CBS?
That hasn't been determined.

When will we see Fedor again?
I'm hoping his thumb will heal and that we'll see him on the next CBS show.

What is the status of his thumb injury?
He's getting the pin taken out in a couple of weeks, and he's still training. He can't spar but he can still do road work and he's staying in shape, and we'll see him back either first or second quarter.

Who will he fight next?
I think Fabricio Werdum and Alistair Overeem are the two guys I'd name off the top of my head.

You said after the CBS card that you were a week away from announcing the signing of some heavyweights. What ever happened to that?
We're still working on it. Give me another week.

When you acquired the assets of EliteXC, the big name who got away was Kimbo Slice. Did you watch his fight on Saturday night?
Yeah, I watched it. I think for where he is in his martial arts learning process he did a good job. Houston's no joke, and it was a good fight for him.

You're more charitable than I am in calling it a good fight, but I agree with you that even going the distance, let alone winning, is progress for Kimbo.
If you had asked me as a betting man whether he'd make it three rounds, I would have said no. But I don't think there was any fighting in the first round -- there was a lot of dancing going on in the first round. In the second Kimbo took Houston down and started to show some signs that he can become a martial arts fighter. But he definitely has a long way to go.

There was a time when people thought you really needed Kimbo for that EliteXC deal to be a success. But now, several months later, are you happy with where Strikeforce is going?
I am. We're excited to get Dan in the mix, and we're going to have more signings soon. We're continuing to build Strikeforce as a mixed martial arts company and Dan is a big part of that.