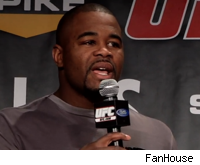 Rashad Evans is not only a former UFC light heavyweight champion and one of the best young fighters in MMA, he's apparently quite the comedian as well. At a question-and-answer session with fans on Friday in Las Vegas, "Suga" showed off his comedic skills by impersonating his mom, Anderson Silva and Marcus Jones.

Evans and host Mike Goldberg even mocked his frequent trash-talking staredowns with Rampage Jackson on The Ultimate Fighter.