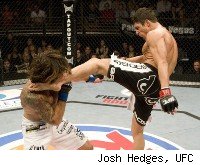 Though most of the MMA world believes Diego Sanchez to have a severe uphill task in dethroning current UFC lightweight champion B.J. Penn, the challenger believes in himself. And to him, that's all that matters.

"My mentality, I'm rigged different in the mind," he said on a Monday conference call for UFC 107. "In my mind I'm going to beat anybody I step into the cage with, whether it be Georges St. Pierre, whether it be Anderson Silva. I don't care. That's the way I'm rigged in the mind. That's because I believe, I have faith. That's something God has blessed me with."

With less than one week remaining before the UFC lightweight championship main event in Memphis, both fighters sound in fact, as though they are in peaceful states of mind.

That, of course, is not so unusual for either Sanchez, who brings sort of a new-age mentality to MMA, or Penn, who is proudly Hawaiian and laid-back. It's not so good, however, for anyone looking for verbal fireworks before the physical fight. The conference call, attended by both, was downright genteel, as the combatants voiced their respective confidence as well as mutual respect.

"I think Diego is great in all areas," Penn said. "He has great takedowns, great jiu-jitsu. I'm sure he has heavy hands and has improved in his striking a lot. All that said, his greatest strength is his tenacity. He comes hard and pushes the pace, so he's very dangerous."

"For me, it's an honor," added Sanchez. "To be the best, you have to fight the best. I always thought it'd be a great matchup, and it's going to be a great fight. I suppose I first thought about this fight back when he beat Matt Hughes and he was the champion. I thought back then, 'I want to fight him. I can go in and beat him.' That's my mentality, and now it's happening."

Sanchez's belief in himself was the most prevalent topic on the call. The San Diego-based fighter mentioned it frequently, saying he won't go in with a heavily crafted plan, opting instead to trust his fighting instincts.

"I'm going to go at it the way I approach every fight: with faith," he said. "I'm a warrior. It's my time. Why are my fights exciting? Ask yourself that. I put it on the line. I don't give boring-ass fights."

Sanchez (21-2) earned his title shot by virtue of four straight wins. In his most recent fight, he won a split-decision over Clay Guida, though many thought he won more handily than the judges' scores indicated.

Penn (14-5) is of course one of the most highly regarded lightweights in MMA history, and most recently stopped Kenny Florian with a fourth-round rear naked choke at UFC 101.

Realizing the enormity of the opportunity, Sanchez noted that for the first time in his career, he hired a strength and conditioning coach for this camp, and believes the move will pay dividends.

"It was a great camp. I feel like I got a lot stronger," he said. "It balanced my body, the right and left side," he said. "I feel like my balance is better. I feel stronger at 155 than I was at 185 pounds fighting on [The Ultimate Fighter]."

Still, Sanchez added that the most important thing in this fight will not be his newfound muscle or anything to do with his body, but his mind.

"It's true in all sports, you have to believe if you're going to win," he said. "People give me a lot of crap about believing in myself. You want me to be this realist guy? No. I'm going in there believing it's my time. That's why I believe I'm going to beat BJ Penn. Because it's my time. Everything in my career has built to this moment. I'm healthy, I'm strong and my mental and spiritual side has never been stronger. Everything feels right, and I'm confident and excited to go in there and do what I love."