Dana White: I Pushed Dan Henderson Into Signing With Strikeforce 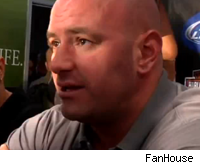 As Dan Henderson's free-agent flirtations with both Strikeforce and the UFC continued without resolution for the last few months, many seemed torn about whether the veteran would eventually return to the UFC.

UFC President Dana White, however, was not one of those people. Telling FanHouse that Henderson's decision-making process forced him to change negotiating strategy and that he ultimately pushed Henderson into signing with Strikeforce, White made it clear that losing the accomplished star was not a big blow to his organization.

"He's happy, but the reality is that I pushed him into signing that deal," White told FanHouse. "I told people over the weekend that he'd sign within the next week."

White says that while he originally entered negotiations in good faith, after three or four meetings with Henderson and his management, he realized it was unlikely the two sides would come to terms. Eventually, he lowered his original offer, effectively forcing Henderson's hand in signing with Strikeforce.

"I wanted him to s**t or get off the pot," he said. "He was in this limbo forever, and he needed more motivation to make a decision.

"Let me ask you a question," he continued. "Do you think that there's any guy we can't get that I want? Other than Fedor [Emelianenko]? So far, he's been the one guy we can't get. But everyone else that we've wanted, we got. If I wanted Dan Henderson, I could've signed him."

Henderson (25-7) became a free agent after his UFC 100 win over Michael Bisping in July. Despite the fact that Henderson is a former PRIDE champion and took part in high-profile UFC bouts with Anderson Silva, Quinton "Rampage" Jackson and Rich Franklin, White says that his addition will actually hurt Strikeforce.

"For the money he wanted, he's not worth it," he said. "He's not a big pay-per-view star, he's not a big attraction, and he's not going to sell out arenas. He wants way too much and he doesn't bring anything to the table."

Although he added there are no hard feelings between the UFC and Henderson, White virtually closed the door on a potential return in the future, saying Henderson's age (39) would probably work against that.

He was not as kind with Strikeforce, saying it was another move that would lead to more problems for the upstart organization.

"Nothing's going to help Strikeforce," he said. "They have too many fighters under contract and not enough events. They can't keep some of their obligations to fighters already. Either they're going to start breaching contracts or paying fighters not to fight. It'll take a lot more than one guy to help them. Their whole business model is f****d. They're coming after UFC? Yeah, OK.

"I could care less," he continued. "Here's the reality: If I wanted him, he'd be in the UFC. It's not like, 'F***, Strikeforce beat me out.' He's been a free agent for a long time. If I wanted him, I would have signed him by now."