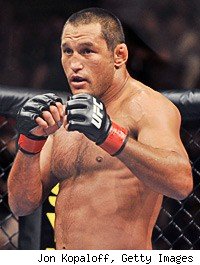 After months of speculation, Dan Henderson has finally agreed to sign with Strikeforce. FanHouse has learned that the 12-year veteran, who was last seen knocking out Michael Bisping at UFC 100 in July, recently came to terms with the San Jose-based organization on a multi-fight agreement.

At this time, it is unknown when and where Henderson will make his debut for Strikeforce.

Yahoo! Sports' Kevin Iole first reported the possibility of Henderson signing with Strikeforce in October, but at Strikeforce's CBS event in Chicago last month, the former PRIDE middleweight and light heavyweight champion told FanHouse that he had not come to terms with the organization yet.

Henderson returned to the UFC in September 2007 following Zuffa's purchase of PRIDE. He lost a light heavyweight title unification bout against Rampage Jackson at UFC 75 and then a middleweight unification match with Anderson Silva at UFC 82. Following those back-to-back losses, he would go on to win his next three UFC fights against Rousimar Palhares, Rich Franklin and Bisping.

Recently, Henderson had publicly talked about being frustrated with the fact that he didn't receive a middleweight title shot following his victory over Bisping and that he was hoping for a bump in salary.

"I'm just hoping to get out there and fight again and get paid what I would like the get paid. I'm not asking to be the top-paid guy at out there at all," he told FanHouse at the last Strikeforce event.

"It's a little step up from my last pay check, but a lot less than a lot of other guys are getting paid," Henderson added when asked what kind of salary he was seeking.

The addition of Henderson to its roster beefs up Strikeforce's 185-pound and 205-pound division. The obvious money fight right off the bat would be against light heavyweight champion Gegard Mousasi, who is currently riding a 14-fight winning streak.

"He's a very tough opponent. Those are the type of guys I like to fight and the guys that it's going to be a big challenge for me," Henderson said.

In November, Henderson said that he was hoping to fight again around Super Bowl weekend (early February), which works out well for him because Strikeforce has a show scheduled for Jan. 30 in Florida.