Matt Mitrione Pleased with UFC Debut, Not Concerned with Being a Villain 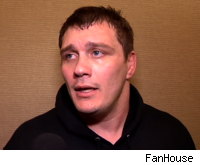 LAS VEGAS -- Matt Mitrione will go down as one of the most controversial personalities in the history of The Ultimate Fighter reality show, and when he faced the popular Marcus Jones on Saturday, he clearly wasn't the fan favorite at the Palms Casino Resort. However, his dominant victory over Jones may have just won him a few more fans, and one thing's for certain, he earned a future in the UFC.

FanHouse spoke to the former NFL player about his impressive victory over Jones and whether he is interested in being the UFC's newest villain. The video interview is below.