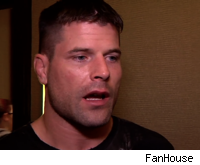 LAS VEGAS -- Rodney Wallace dominated Brian Stann in the first round of their fight on Saturday night, but the former WEC light heavyweight champion was able to regroup in rounds two and three en route to securing a unanimous decision victory.

FanHouse spoke to the former U.S. Marine immediately following the victory about he he dealt with Wallace's strength and the evolution of his MMA game. The full video interview is below.