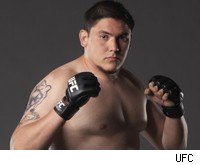 The first bout is scheduled to begin around 7:00 PM ET.

Round 1: Madsen connects with a right to open the fight. Both men appear to want to stand and trade early. Wren misses on a big right hook. Wren is bleeding under his right eye. Nice right/left combo by Wren. Wren is controlling the center of the octagon and almost stalking Madsen. Neither man is even thinking takedown. Wren sticks out his chin asking Madsen to hit him. He doesn't. Madsen lands a nice right upper cut. Wren shrugs it off and continues to press the action with combos. FanHouse scores the round 10-9 in favor of Wren.

Round 2: Wren is playing up to the crowd big time. Both men still aren't interested in going to the ground. No one has really connected on much in the round. Wren's eye isn't bleeding as much as the first round. Wren continues to control the center of the Octagon. With seconds remaining Madsen shoots for a single-leg, but Wren shrugs it off. FanHouse scores the round 10-9 in favor of Wren.

Round 3: Wren connects with a right which seems to have stunned Madsen. He lands a body shot. Wren continues to stick out his chin for Madsen to hit but Madsen just walks away. Wren misses a right, Madsen lands a left hook. Wren continues to stalk Madsen, and as he doing so, Madsen connects with a left as he is backpedaling. Wren is still controlling the Octagon and the pace of the fight. He begs Madsen to meet him in the middle of the cage. Wren definitely knows how to play to the judges and fans. Wren shoots for a double-leg, but nothing doing there. Madsen connects with a left and right hook with seconds remaining. He also lands a right leg kick to the body after the round ends. FanHouse scores the round 10-9 in favor of Madsen.

Round 1: Wallace, whose "Sho Nuff the Master" nickname might be the best in MMA, takes Stann down early, but Stann gets up almost immediately. Wallace clearly wants to test Stann's ground game. So far Stann is doing a good job of keeping the fight standing. Eventually, though, Wallace takes him down with a single-leg. Stann gets up, they exchange punches. Stann fires a leg kick, Wallace catches it but is unable to take him down, so he suplexes him. Amazing display of strength by Wallace. Stann gets up. Wallaces takes him down again with a single-leg and finishes the round in Stann's guard throwing punches. FanHouse scores the round 10-9 in favor Wallace.

Round 2: Guess what? Wallace shoots for a single-leg at the beginning of the round. He is successful, but Stann gets up and lands in Wallace's guard. Wallace isn't allowing Stann to posture up, so Stann connects with body punches. Stann moves into side control. After Stann lands in half guard, Wallace shows off some good jiu-jitsu by attempting an ankle lock, but it was tight enough. FanHouse scores the round 10-9 in favor Stann.

Round 3: Joe Stevenson and Todd Duffee are in the stands coaching Stann. He is gaining more momentum as Wallace doesn't seem to have enough gas in his tank to take him down anymore. They are pressed up against the cage, but no one is landing any shots. Both men look pretty tired. With 30 seconds left, Stann throws a leg kick, which Wallace catches. Wallace just doesn't have enough juice in him to take Stann down at this point with the single. Round ends. FanHouse scores the round 10-9 in favor Stann.

Round 1: Hallman shoots early for a single leg, but Howard stuffs it. They clinch briefly, and then Hallman takes him down. Hallman is in Howard's guard. The veteran eventually passes and is in half guard. Referee Josh Rosenthal tells the fighters they need to provide some action. They don't, so he stands them up. Howard lands a body shot, which seems to have stunned Hallman. He shoots in but Hallman reverses the takedown and goes for an ankle lock. Howard appears to be in trouble, but he does a good job of escaping. Hallman finishes the round in Howard's guard. FanHouse scores the round 10-9 in favor of Hallman.

Round 2: 30 seconds into the second round, Hallman locks in a standing guillotine choke. Howard rolls, which releases Hallman's right hand. Hallman is only using his left hand on the choke, which eventually allows Hallman to escape. Hallman immediately secures Howard's back as he works towards a rear-naked choke. The fans begin to chant "boring." Not much is accomplished in the last 90 seconds. FanHouse scores the round 10-9 in favor of Hallman.

Round 3: Howard, knowing he is down two rounds, comes out very aggressive to start, but Hallman quickly ties him up. Hallman takes him down although Howard lands in his guard. Howard passes and lands in full mount position. Hallman isn't allowing Howard to posture up but Howard is still able to land some shots in mount. Hallman reverses and lands in Howard's guard. Crowd starting to get into the action a little more. Little action transpires on the ground so ref Rosenthal stands them up. With less than 15 seconds left, Howard goes on the offensive landing combos, drops Hallman with a big left hook and finishes him with another left on the ground with only seconds remaining.

Round 1: Fight starts standing with Bocek connecting on a couple strikes. The Canadian shoots and takes Brammer down with a double leg two minutes into the round. Brammer immediately gives up his back. Bocek works towards a rear naked choke. Eventually Brammer stands up with Bocke still on his back. Bock secures the choke underneath Brammer's chin as he is still standing, leading to the tap out.