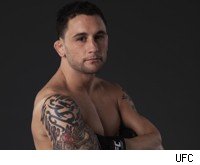 This is The Ultimate Fighter 10 Finale live blog for Frankie Edgar vs. Matt Veach, a lightweight bout on the Spike TV card.

After beating former champion Sean Sherk by unanimous decision in May, Edgar looks to keep his momentum going against an undefeated prospect out of Matt Hughes' H.I.T. Squad.

Round 1: Edgar throws a kick. Edgar shrugs off a Veach takedown attempt. Veach throws a leaping left and Edgar avoids it. Veach grabs a single-leg and Edgar defends. They knee each other in clinch. Edgar throws a high leg kick and Veach catches it and puts Edgar down. Edgar stands back up but Veach lifts him high and slams him down. Edgar gets to his feet and he's slammed on his back hard a second time. Edgar stands back up. Edgar lands to the body. Edgar punches Veach in the stomach. Veach likes to move forward with a left hook. Veach lands a nice jab. Veach throws a big overhand right and Edgar shoots. Veach punches Edgar back. Edgar lands a punch. Veach catches a kick and the bell sounds.

FanHouse scores the round 10-9 for Veach.

Round 2: Veach jabs. Edgar moves forward with punches and Veach avoids. Veach rushes in for a takedown, but Edgar defends. Edgar lands a right off a one-two combo. Edgar pops a jab. Edgar stuns Veach with a right. Veach falls and Edgar swarms. Edgoar drops lefts from full mount. Veach gives up his back. Edgar taps him out with a rear-naked choke.
Frankie Edgar def. Matt Veach via submission (rear-naked choke) - R2, 2:22