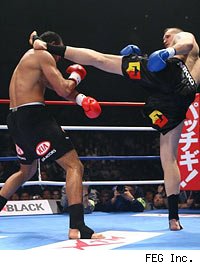 Semmy Schilt has done it again, beating Badr Hari by first-round TKO in the K-1 World Grand Prix 2009 Final and winning the K-1 GP title for a record-tying fourth time.

Hari got off to a blistering fast start, throwing wild punches at Schilt and appearing to land some of them and hurt his much bigger opponent. But Schilt withstood the initial storm and quickly turned the tables.

Schilt shocked Hari by knocking him down with a hard jab in the first round, then knocking him down again just seconds later with a head kick. When he used a body kick to secure his third knockdown, he won the fight via K-1's three-knockdown rule.

Schilt won all three of his fights on Saturday -- against Jerome Le Banner, Remy Bonjasky and Hari -- in the first round. He needed a total of just 5 minutes, 52 seconds to win the three fights, the fastest that anyone has ever won the K-1 World Grand Prix.