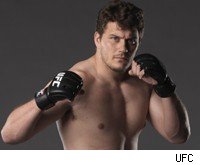 In a battle of former NFL players fighting for the first time in the UFC, Matt Mitrione knocked out Marcus Jones Saturday night at the Ultimate Fighter Finale in Las Vegas.

Jones immediately clinched Mitrione and took him to the ground just seconds into the first round, and that set the stage for how the fight would go: Jones wanted to get it on the ground and use his physical strength and jiu jitsu skills, while Mitrione wanted to keep the fight standing and turn it into a boxing match, where he had the edge. The first round was a back-and-forth battle with Jones doing more on the ground and Mitrione doing more on his feet.


But at the start of the second round, Mitrione landed one hard punch, and that was that: It toppled Jones to the ground, and Mitrione pounced and pounded him out just 10 seconds into the round.

Jones, a former Tampa Bay Buccaneers first-round draft pick, has undeniable strength and good ground skills, but he has a long way to go as a stand-up fighter before anyone can consider him a legitimate mixed martial artist. Jones' professional MMA record now falls to 4-2, and both losses were ugly knockouts.

It was the professional MMA debut for Mitrione, and he showed good poise and power. He doesn't have the talent to be a UFC champion, but he will have some interesting fights ahead of him. And as he showed on Saturday night, he can throw a punch.
http://xml.channel.aol.com/xmlpublisher/fetch.v2.xml?option=expand_relative_urls&dataUrlNodes=uiConfig,feedConfig,localizationConfig,entry&id=791869&pid=791868&uts=1260090908
http://www.aolcdn.com/ke/media_gallery/v1/ke_media_gallery_wrapper.swf
Kimbo Wins at TUF 10 Finale
Kimbo Slice punches Houston Alexander during their TUF 10 Finale fight in Las Vegas, Nev. on Saturday, Dec. 5, 2009.
Josh Hedges, UFC
Josh Hedges, UFC