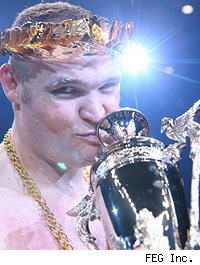 The K-1 World Grand Prix Final 2009 is in the books, and Semmy Schilt is the champion. My final thoughts ...

-- I was surprised to see the familiar face and hear the familiar voice of Michael Buffer as the ring announcer. Hiring Buffer to give his signature "Let's get ready to rumble" catchphrase is expensive, but spending that kind of money shows once again that K-1 is serious about attracting American fans, who associated Buffer's voice with big fights.

-- I love Badr Hari's striking, and I think it's some of the best striking in any sport -- boxing, MMA or kickboxing. But he simply leaves himself too wide open to taking punishment, and he needs to improve his defensive technique before he becomes a K-1 World Grand Prix champion.

-- Alistair Overeem just about beheaded Ewerton Teixeira with a knee to the chin in the first round of their bout. Frightening stuff. It looked to me like Overeem landed two knees in a clinch, which is against K-1 rules, but the referee allowed that devastating second knee.

-- Jerome Le Banner didn't look like he particularly wanted to fight Schilt. Le Banner is one of the all-time greats, but he put in a fairly weak effort in what may have been his final Grand Prix.

-- Remy Bonjasky didn't fight nearly as well as I thought he would. He was too tentative in his quarterfinal bout, and in his loss to Schilt in the semifinal he followed up on a flash knockdown in the opening seconds by doing basically nothing.

-- Top to bottom, K-1 put on a great show. It may have been the best combat sports event of the year.