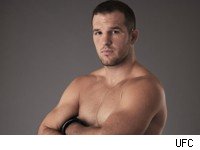 Jon Jones brutalized Matt Hamill in a light heavyweight battle at the Ultimate Fighter Finale in Las Vegas Saturday night, taking him to the ground early in the first round and hitting him with elbow after elbow after elbow to the face, badly bloodying Hamill's nose and eyes. But the referee ruled that the final elbow was an illegal direct downward blow, causing Jones to be disqualified and giving Hamill the victory.

Hamill said afterward that he had been badly hurt both in the stand-up and on the ground.

"I couldn't defend it," Hamill said afterward. "I can't move my arm."


Jones seemed to accept the referee's ruling that the elbow was illegal, and he vowed to grow as a fighter.

"I've heard so many times that when you lose, you come back a better, stronger person," Jones said. "Everything happens for a reason."

At only 22 years of age, Jones took the loss in stride.

"I try to look at everything at life for the best, but now I am not worried about being undefeated," Jones said at the post-fight press conference.

However, Jones felt the fight should have been stopped, as apparent with his several looks to the referee during the ground and pound to encourage a stoppage.

"I think after 14 or 15 unanswered punches, it should been stopped," he said. "It was awkward to keep hitting him like that. I was like, 'c'mon, let's stop this.'"

The disqualification was a disappointing ending to the bout, and a rematch may be in order.