Five Things to Watch for in TUF 10 Finale 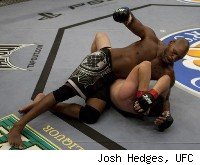 In an event such as the one going on Saturday at the Palms in Las Vegas, the most a promoter can hope for is to create a few stars. Sure, the UFC can expect to pop a strong rating because Kimbo Slice is involved, and his fights have historically done huge numbers, but the more important goal is what the show accomplishes long-term.

With that in mind, here are five things to watch for in the The Ultimate Fighter's season 10 Finale.

Jon Jones (9-0) is one of the most talked about young fighters in MMA. Why? He's flashy. He's well-spoken. He's well-rounded. And most of all, he wins. But up until now, Jones has done all that on pay-per-view, where the audience is a bit limited by the pricetag.

On Saturday, in front of what will probably be the biggest viewership to date watching him, Jones has a chance to take another step forward in his progression by beating Matt Hamill (7-2), whose only decisive loss was a TKO to Rich Franklin (the other was a disputed decision to Michael Bisping).

A solid win over Hamill is a decent barometer with which to measure his future. No one's saying he's ready for Lyoto Machida or Shogun Rua just yet, but it is starting to get fun thinking about it.

Roy Nelson is a very good heavyweight. He's fought in EliteXC. He's fought in Bodog. He was the IFL champion. But long-term, Brendan Schaub (4-0) is the prospect with the bigger upside.

This isn't so much an indictment on Nelson (13-4) but rather a commentary on the forward-thinking mindset of the sports world. Nelson is already 33 years old; Schaub is 26. Nelson has had opportunities against a few upper-tier fighters like Ben Rothwell and Andrei Arlovski, and for various reasons, was unable to capitalize. If he wins, it will appear to most as though the UFC has simply added another gritty veteran to the roster. Of course, there is nothing wrong with that, but a better scenario would be a true young blood roaring his way into the pack.

A win over Nelson would give Schaub instant credibility as a heavyweight in a division that's always desperately in search of fresh talent.

Most of the people tuning in Saturday will be most interested in Kimbo Slice and Houston Alexander. It makes sense. They have crowd-pleasing styles that lead to exciting fights. But both men have a lot to lose on Saturday.

If Alexander (9-4) loses, it would be four straight losses in the UFC, and that might be his last chance in the organization. If Kimbo (4-1) loses, it would be three defeats in a row (including the Roy Nelson fight, which is officially considered an exhibition).

More than just Kimbo's credibility is on the line here; also at stake is something just as important for special cases like him: his marketability. How many losses can it take? He came across extremely likeable on TUF, and that will help. Fairly or unfairly, there are big expectations on him; people watch in hopes of seeing something spectacular, and if they continually leave disappointed, they one day may not return.

4) Nobody puts Big Baby in the Corner

Though TUF 10 was often centered around Kimbo Slice, perhaps no one commanded the screen the way Marcus Jones did. At 36 and with an NFL past, Jones (4-1) has the kind of interesting back story and infectious personality that can make mainstream media and casual fans take notice if he can find success in his fight with Matt Mitrione.

Jones truly loves the sport and would be a wonderful ambassador for it. It's a shame he didn't start training sooner, because his personality, athletic skill and power would have potentially made him a superstar on the level of Brock Lesnar. Still, if he can address his striking deficiencies, he could make some noise and draw a crowd while he's doing it.

Boring, I know, but necessary.

There doesn't seem to be a whole lot of buzz around Dec. 12's UFC 107, does there? Expect the UFC to ramp up the mentions on Saturday. As we noted, this TUF Finale could draw a larger audience than usual with Kimbo Slice on the card, so the UFC will no doubt take the opportunity to bring attention to the upcoming lightweight title fight pitting B.J. Penn against Diego Sanchez.