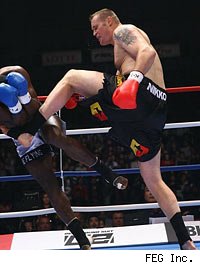 Defending champion Remy Bonjasky lost in the semifinal of the K-1 World Grand Prix Final 2009 Saturday, as Semmy Schilt overpowered him, knocked him down twice, and finished him in the first round.

The fight got off to a stunning start, as Bonjasky dropped Schilt with a left hook just seven seconds into the fight. No one saw that coming, as Schilt entered the tournament as the favorite, and Bonjasky usually takes a more cautious approach and picks his opponents apart.

But once Schilt shook that first knockdown off, the fight went his way: He cornered Bonjasky and bashed him with powerful punches and effective leg kicks, nearly knocking him out with the first knockdown and then winning the fight with a second knockdown in the first round, which automatically ends tournament bouts.

Many K-1 observers think Bonjasky's fighting style is too defensive and too boring, but I think Bonjasky is a great champion, and on a personal level I was a bit disappointed to see him lose to Schilt. Bonjasky is a gentleman inside and outside the ring, and I'll be looking forward to seeing what he does next. Maybe Bonjasky still has another World Grand Prix title in him, and maybe some day he'll match Ernesto Hoost's record of four titles. But his championship reign has ended, and he's out of the 2009 tournament.