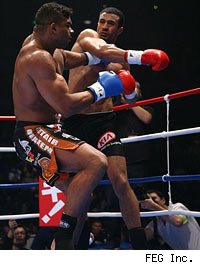 Overeem is the Strikeforce heavyweight champion and widely regarded as one of the Top 10 heavyweights in MMA. But over the last year he has turned his attention toward kickboxing and done it very well, previously knocking out Hari and also fighting very well in a close loss to Remy Bonjasky.

But while Overeem is big and strong and a threat to anyone in kickboxing or MMA, on Saturday he wasn't as good as Hari. Although Overeem used his oversized muscles to throw Hari around early, Hari maintained his composure and knocked Overeem down with a hard punch. Overeem got up, but Hari stayed in control and landed a left high kick that sent Overeem reeling into the ropes. Overeem didn't hit the deck, but the referee ruled it a knockdown. That was the second knockdown of the round, which under tournament rules ended the fight.

Overeem has said he wants to defend his Strikeforce title against Fedor Emelianenko, and that would be a great fight. Overeem has had a good run in K-1, but now it's time for him to do what he does best: MMA.