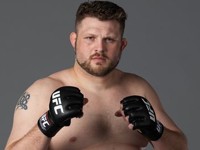 Kimbo Slice stepping into the Octagon against Houston Alexander will be the biggest draw for Saturday night's Ultimate Fighter Finale on Spike TV. But it will also most likely be the least competitive fight of the night. We've got a full preview and predictions for the four much more competitive UFC fights on Saturday night below.

When: The non-televised undercard starts around 7 PM ET Saturday, and the Spike TV card starts at 9.

Where: The Pearl at the Palms Las Vegas

Predictions on the five televised fights:

Roy Nelson vs. Brendan Schaub
I've said from the outset that I thought Nelson was the best fighter on this season of The Ultimate Fighter, and nothing I've seen so far changes my mind. The big-bellied Nelson doesn't look very impressive, and his fighting style can be boring at times, but his combination of very good ground skills with hard punching is far beyond anything Schaub has encountered in his brief MMA career. Nelson will become the next Ultimate Fighter on Saturday night.
Predicted winner: Nelson

Matt Hamill vs. Jon Jones
Hamill is a nice guy, a good role model and a fan favorite, and I always enjoy watching him fight. But I don't think he has anywhere near the kind of quickness to deal with Jones in the stand-up, and I expect Jones to win this fight on his feet.
Predicted winner: Jones

Kimbo Slice vs. Houston Alexander
The list of fighters Alexander has defeated includes some legitimate opponents like Keith Jardine and Alessio Sakara. The list of fighters Kimbo has beaten consists of, well ... let's just say significantly lesser competition. Alexander is more experienced and more skilled than Kimbo and should handle him easily.
Predicted winner: Alexander

Frank Edgar vs. Matt Veach
Veach is an undefeated, well-rounded young lightweight, but I just don't think he's ready for an opponent like Edgar, who is one of the Top 10 lightweights in the world and could earn a title shot in 2010.
Predicted winner: Edgar

Marcus Jones vs. Matt Mitrione
The final episode of The Ultimate Fighter did a nice job of building some heat for this fight between two former NFL players. Mitrione has enough punching power to expose Jones' questionable chin, but I expect the bigger, stronger Jones to win the fight on the ground.
Predicted winner: Jones
Follow along on Saturday night with FanHouse's live Ultimate Fighter Finale coverage and UFC Twitter updates.