Rampage Jackson: 'I'm Coming Back to the UFC' 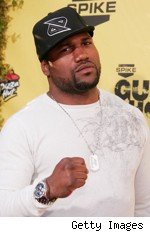 In a new post on his official web site, Jackson says he will step into the Octagon again because he wants to settle a score with both Rashad Evans -- with whom he has a longstanding war of words -- and UFC President Dana White.

"I wanted to let my fans know that I'm going to come back to the UFC & finish my contract," Jackson wrote.

"Not because the haters are talking s**t about me being scared of Rashad or [Ultimate Fighter contestant Darrill Schoonover] or anybody else. I'm coming back for my fans & to shut Rashad's mouth up & shut Dana's mouth up. Then after that I'm going back to doing movies & I might do a boxing match once a year just to stay in shape. Hate on dis!"

Jackson, who spent much of this year filming the new A-Team movie and who announced his resignation from the UFC after White belittled his acting aspirations, did not say when he'll fight again. But his first fight will presumably come against Evans, who fights Thiago Silva on January 2.

Look for the long-awaited Jackson vs. Evans fight to finally happen in the spring of 2010.