Matt Veach: I'm Confident in My Ability Against Frankie Edgar 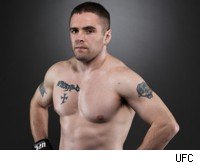 Stepping in as an injury replacement for Kurt Pellegrino, Matt Veach has the opportunity Saturday in only his second UFC fight to make a name for himself against a top 10 level fighter in Frankie Edgar.

In an exclusive interview with FanHouse, Veach talks about how he ended up at Matt Hughes and Robbie Lawler's H.I.T. Squad camp in Granite City, Ill. and clears up a couple of rumors floating around.

You first got connected with the H.I.T. Squad as one of Matt Hughes' training partners?

Yeah, I was doing MMA a couple years before I hooked up with these guys and Matt was just training for Georges St-Pierre before he opened up his gym. He was training down in Hillsboro and he was looking for training partners and Marc Fiore called me to come train with Matt and I've been with them ever since.
What's it like training with a future Hall of Famer?

Oh it's awesome. Just the knowledge that he brings to the table. Just him as a coach. It's great.

What does Frankie Edgar bring to the table come Saturday?
I think he's good all around. I think it's a great opportunity, definitely, to get my name out there, and put up on the rankings.
You came in short notice in your UFC debut and won a come-from-behind TKO. Do you think that performance reassured you that you belong in the UFC?

Yes, I think it boost my confidence quite a bit. Just knowing a guy with a hard chin, and just able to fight back from that adversity.
And that's got to help you coming into a fight against the top ranked Edgar?

Yeah, definitely. I'm definitely confident in my ability.
While Edgar holds the edge in experience, on the bright side you have more footage to look at and you're more of a mystery to him. Is studying tape something you've taken advantage of?

Yeah, I definitely studied a couple of his fights. Just knowing from watching the tape, I know he likes to come in, through combinations and move. [He] moves around a lot so we implemented that in some of my sparring sessions. Had some people try to simulate him and stuff like that.
Is it true you once thought about a career as a pro wrestler?

No, that's a rumor. I never considered professional wrestling. (Laughs.) I have no idea where that came from. (Laughs.) That's fun though.
How about one where you tried out for The Ultimate Fighter?

I filled out an application for it when I first got to the gym and never heard anything back. They didn't have any video on me, though. I didn't send any video in, so that was probably why I didn't hear anything back.

The H.I.T. Squad outside of the founders are beginning to make an impact. There's you. There's Brian Foster coming off an impressive win over Brock Larson, and Jon Madsen will arrive in the UFC this Saturday through TUF 10. Can you tell me what the atmosphere is like at the gym?

It's a bunch of guys that have all the same goals: Be a world champion and be the best. Everyone's hungry and it's a good atmosphere to be around.