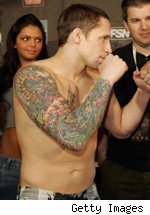 Less than a month after his win on the undercard the Nov. 7 Strikeforce event, former WEC bantamweight Jeff Curran returns to the cage Saturday against DEEP Protect Cup winner Tomohiko Hori at XFO 34 in Lakemoor, Ill.

In an exclusive interview with FanHouse, Curran talks about the fight and his possible future with Strikeforce, WEC, UWC or in Japan.

Ray Hui: Hori began to make a bit of a name for himself this year winning the DEEP Protect Cup and challenging Masakazu Imanari for the belt, but he's still unfamiliar to most people outside of Japan. Can you break him down for us that aren't familiar with him?

Jeff Curran: Hori is actually similar to Mizugaki. He's a really good standup fighter. He's got good submission defense, for the most part, and it looks like his wrestling is pretty decent too. He's fought a lot of his career at 145 and 155, but I believe at 135 he's undefeated.
You felt that you should have gotten the decision against Takeya Mizugaki. Is that part of the reason how Hori's name came up? Do you gain extra satisfaction in fighting Hori since he is a training partner of Mizugaki's?
Curran: It's kind of like that. I beat Mizugaki. I mean, I feel like I beat Mizugaki. I wanted to make sure when I talked about who I wanted to fight for the XFO, everybody focused on getting an opponent that would help me in the Japanese market if for some reason the WEC doesn't' want me back. Thankfully we came across somebody who is a good matchup for me and is a reputable opponent and makes for a huge main event for XFO.
You recently fought for Strikeforce and I noticed that Shawn Tompkins was in your corner for your last Strikeforce fight. I know you two have some sort of working relationship but I don't remember him cornering you before.
Curran: He's helped corner me a couple times in my life when it's worked out, kind of a friendship thing. Shawn's kind of been a random, depending on scheduling, where he'll be able to train me. He's not my Thai boxing instructor. I learn Thai boxing under Frank Cucci in Virginia Beach. He's basically the head coach of where Mackens Semerzier is from. He's my original instructor and I also have boxing coaches that holds pads for me. Whenever I can I like to use Shawn Tompkins to clean me up and train me. Had Shawn and I live in the same spot, he would definitely be my full-time Thai boxing coach. And then I'd have my boxing coach (Doug Mango) separate.

I understand you're still under contract with Strikeforce?

Curran: I don't know the specifics with the contract, to be honest with you. I think it's like if they come back to Chicago within the term of my contract ... If that's the case, then I'm going to be fighting one more time for them. If not, I'll just let it run its course and not worry about it. But ideally, you want to be with the WEC, right?

Curran: Yeah, to get back to the WEC would be the primary goal.
You just mentioned Japan as a possibility, and that's definitely a place outside of WEC where there's a thriving 135, 145-pound division. So DREAM and Sengoku are a couple of places on your radar?

Curran: Yes, something like that. I definitely want to fight the best, so if the WEC is not going to provide that opportunity, then I have to go to the next in line. I've considered maybe even fighting for that UWC out in Virginia. They look like they're doing good things.