Brendan Schaub: 'This Is Just the Tip of the Iceberg' 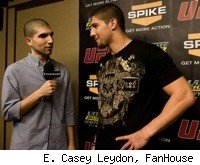 LAS VEGAS -- Brendan Schaub only had four professional fights under his belt coming into this season's edition of The Utlimate Fighter, yet the former University of Colorado and Arena Football player came across as one of the most confident fighters living in the house. That confidence, and not to mention his well-rounded skills, helped propel Schaub into the finals against veteran Roy Nelson on Saturday night.

FanHouse spoke to Schaub about the biggest weaknesses in Nelson's game and why he believed he would make it to the finals from day one. The video interview is below.