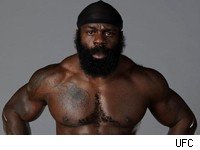 With the conclusion of the last two taped episodes of The Ultimate Fighter 10 Wednesday, Saturday's live finale card has been finalized with the addition of five heavyweight bouts.

In the main event will be the heavyweight final featuring former IFL champ Roy Nelson and former pro football player Brendan Schaub vying for the six-figure contract with the UFC.

Also added to the televised card are brawlers Kimbo Slice and Houston Alexander in a 215-pound catchweight bout, and a matchup between semifinalists Marcus Jones and Matt Mitrione.

The undercard was rounded out with two more TUF 10 bouts, Darrill Schoonover vs. James McSweeney and
Jon Madsen vs. Justin Wren.