The K-1 World Grand Prix 2009 is the year's biggest kickboxing event, and as we get ready for the December 5 show, we have K-1 announcer Michael Schiavello offering his commentary on each of the fighters. His thoughts on defending champion Remy Bonjasky are below. 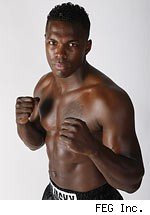 An outstanding fighter on a number of levels, Bonjasky is the three-time and reigning K-1 World Grand Prix champion. While to many he is a shining example of all a K-1 champion should be – humble, well-mannered, aesthetically beautiful to watch, beautifully skilled, eloquent and handsome – there are those detractors who claim his peek-a-boo style goes against the K-1 Bushido spirit of kill or be killed.

Whether you're a fan or not of Bonjasky's cover-up-and-counter style you can't deny it is a style that has made him one of the most successful fighters on the planet and a man who almost never gets beaten. Indeed Bonjasky comes into his title defense on December 5 on an 8-fight win streak and has only lost five times in the last five years. That is an amazing accomplishment for a heavyweight competing consistently at the highest level, especially when you consider Bonjasky's busy roster having 12 fights since 2007.

With three K-1 Grand Prix crowns to his credit, Bonjasky still does not receive the accolades of other multiple GP winners such as Ernesto Hoost (4), Peter Aerts (3) and Semmy Schilt (3). Bonjasky's back-to-back wins in 2003 and 2004 were considered two of the weakest Grand Prix line ups ever and his 2008 win was handed to him on a silver platter in the form of Badr Hari's brain explosion. Despite the criticism that is sometimes leveled at Bonjasky however, he must be respected as a technician of the highest order and one of the smartest K-1 fighters of all time, ranking up with Ernesto Hoost in terms of strategy and gameplan. Indeed perhaps the only weakness in Bonjasky's skill set is his lack of any real boxing power. I have always speculated what could have been (and could still be) for Bonjasky if he had spent twelve months with a good boxing coach. A Bonjasky with world-class hand speed and power is a scary thought indeed!

Bonjasky has all the goods to win the Grand Prix for a record-equalling fourth time, provided he believes in himself, especially should he reach the semi final and meet Semmy Schilt. The last time the two met, in the semi finals of the 2005 Grand Prix, Bonjasky lost via KO though it looked to me like he just didn't want to be in the ring with the monstrous Schilt. Should Bonjasky get past Zimmerman and then Schilt and reach the final, likely against Badr Hari, you have to wonder if once again he will have Badr's number as he has the last two years.

FAST FACT
Remy Bonjasky used to be a male model and also worked as a banker. In 2008 he released his autobiography entitled 'God in Japan'.