New Regulation Drums Up Excitement for UFC in Boston 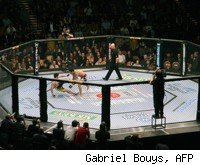 Massachusetts-based promoters and fighters alike are thrilled with the news Monday that legislature has passed a bill for the regulation of MMA in the state, opening the door for UFC events as early as Summer 2010.

Regulation legitimizes the sport for everyone involved, and the arrival of the UFC grants a number of local fighters within the promotion the opportunity to compete in front of family and friends.

MMA wasn't illegal per se, but there was no governing body for the sport, and the UFC's stance is to only promote events where there is regulatory body in the state. In the past couple of years, MMA has been most prominently promoted in Massachusetts through the work of Joe Cavallaro and his World Championship Fighting cards, which air on the Comcast SportsNet New England channel.

"The passing of the bill is great," Cavallaro told FanHouse Tuesday. "We're excited about it and actually lobbied with the UFC and their fighter Kenny Florian in front of the senate for the regulation to be passed. This bill changes the face of MMA in New England forever. I think it's a great thing for the sport, the fans, and certainly all of the fighters."

UFC president Dana White has roots in Boston, where he worked as a bellhop at the Boston Harbor Hotel and opened a boxing gym before moving to Las Vegas and building the UFC.

"I am so pumped that the UFC is finally coming to Massachusetts," White said Monday. "I guarantee that we will put on an incredible UFC event for Boston in 2010."

Cavallaro, who became a close friend of White when the two worked at the same Boston hotel, thinks the added presence of the UFC only helps his own brand.

"If the UFC brings an event to the TD Garden, will bring in 20,000 fans, most of which may have never seen a live MMA event," Cavallaro said. "That opens up a tremendous opportunity for us to grow and expand as a show. Fans who have never seen a fight live have truly never seen a fight. There is absolutely nothing more dramatic and exciting than live mixed martial arts."

"I am excited about MMA being regulated in Mass.," Lauzon told FanHouse. "I have been talking to the UFC for a long time about how if and when they came to Mass., I wanted to be on the card. The timing is actually really good for me because I will be able to fight in January, fight here in the summer ... and maybe even get one fight in between those two."

"The chance to fight in front of my hometown crowd has always been a dream of mine," said Florian, who was born in Massachusetts and attended Boston College. "Now it looks like my dream will finally come true."