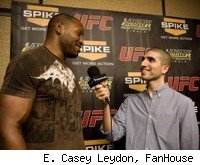 LAS VEGAS -- Marcus Jones tried his best, but after initially rejecting the "Big Baby" nickname Rashad Evans gave him on this season's edition of The Ultimate Fighter, the former defensive end for the Tampa Bay Buccaneers has agreed to go with it just days before he makes his UFC debut against another ex-NFL player, Matt Mitrione, on Saturday night.

FanHouse spoke to Jones at Thursday's media workout about why so many fans are drawn to him, his beef with Mitrione and why he decided to not retire from MMA following his semi-final loss to Brendan Schaub. The video interview is below.