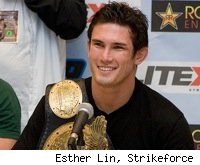 The on-again, off-again MMA fighter was, and arguably, still remains one of the sport's brightest stars, but focus in recent years has been redirected from his talent and away towards his outside disputes: contractual and his unwillingness to defend his belt against Nick Diaz during his EliteXC reign.

Also, his passion for boxing has steered him away from MMA. Since last fighting in MMA in June 2008, a successful title defense against Yves Edwards, Noons has competed in five boxing bouts. Noons carries a 12-2 boxing record and won four out of the five fights the past year. But it should be noted that his wins weren't against top tier boxers, or anywhere close to the level he would be at as a MMA fighter. He does insist in a statement to Strikeforce that his recent boxing pursuit was moreso to better his striking.

"I'm super excited to be a part of Strikeforce and I'm looking forward to putting on great fights," Noon said. "I've always wanted to come back, but I wanted to box for a little while in order to polish my boxing skills. Now, I'm ready to jump back into the picture in MMA."

The date for Noons' Strikeforce debut is to be determined.