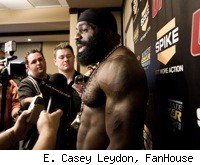 LAS VEGAS -- A media throng gathered around a hungry and tired Kimbo Slice on Thursday, a little over 48 hours before his official UFC debut against Houston Alexander at The Ultimate Fighter Finale.

Slice, who lost to finalist Roy Nelson in the first round of the competition, talked about having to cut weight for the first time in his career and how it has affected him. He also discussed training with the well-respected American Top Team camp in Florida and whether he enjoyed being a part of the reality show. A video of the media gathering can be found below.