Kimbo Slice in a Fighting Mood, Ready For Houston Alexander 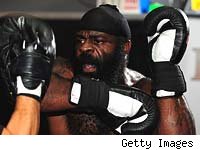 About 48 hours from his true UFC debut, Kimbo Slice is not in a talking mood.

The former street brawler who is trying to add another stripe to his credibility as a full-fledged mixed martial artist, doesn't particularly want to answer any more questions about his upcoming match with Houston Alexander, doesn't feel good about cutting weight for the first time, and doesn't want to share any emotion about his march towards athletic legitimacy.

There's only one thing he does want to do: fight.

On Thursday afternoon, the 35-year-old took part on a media conference call to hype Saturday's live Ultimate Fighter finale, during which his fight with Alexander will be featured. And though clearly the center of attention from the media, Slice shared only a few slivers about the last several weeks leading up to the fight.

Central among them: his weight cut.

For the first time in his life, Kimbo will be cutting weight to fight. Normally checking in at 230-235 lbs., Slice is on his way down to a 215-pound catch weight against the heavy-handed Alexander, who has fought all of his previous UFC bouts as a light-heavyweight.

Mentioning that he hasn't seen those numbers on a scale under his feet since his youth, Slice, in a rare moment of candor, admitted the weight cut was not going well.

"To be straight-up honest, the last time I was at this weight, I was in middle school," he said.

When asked how the process was going, he replied, "Not good. Moody. You just don't feel the same. It's mental, but it's not a good feeling to be honest with you. I'm a little anxious. It's everything mental."

Slice, who moved his training to the world-renowned American Top Team after the taping of the show, was a little less forthcoming about his time there.

To wit, this exchange:

Reporter: "Overall, how do you feel about the experience at American Top Team the last couple months of preparation?"

The UFC, of course, is hoping that Slice's participation, along with a strong main event of rising star Jon Jones against Matt Hamill, and the TUF championship match between Brendan Schaub and Roy Nelson, will translate to big ratings.

They have reason to be optimistic. In the past, Slice's fights have been among the most viewed in U.S. MMA history. In fact, three of his fights are among the four top-viewed fights in U.S. history. His May 2008 fight with James Thompson on CBS drew over 7.2 million viewers; his October 2008 bout with Seth Petruzelli drew nearly 6.5 million, and 6.1 million tuned in to watch his TUF opening-round bout with Nelson.

Less predictable is the outcome, and how it will impact Slice's long-term future. While the UFC's light-heavyweight class has more standup fighters -- a style that gives him a better chance of success -- a loss over Alexander in this bout would make it more difficult for the UFC to continue shining its spotlight on him ahead of other, more deserving fighters.

With those factors in mind, it's understandable why Slice is a bit on edge. While he still commands a room and draws attention, a loss would chip away a little more of his luster, while a win would shine a new coat.

Admitting that he would prefer a standup fight, Slice nevertheless mentioned he was willing to scrap anywhere to get a win.

"If it goes [to the ground], it goes there. But I want to knock him out," Slice said. "EIther he knocks me out or I knock him out. If it goes down I'll do what I gotta do to defend myself. Wherever it goes, it goes. If it's a cage, the street, the hotel, I come to fight. I'm good with everything else. I came to fight."

Standing in his way will be Alexander, a 37-year-old single father of six who has fists like hammers, knees like battering rams, and a simmering fury that only escapes once the cage door is locked.

Alexander, who hasn't fought in the UFC since a Sept. 2008 loss to Eric Schafer, realizes the enormity of the situation, and the opportunity that lies ahead.