Houston Alexander: I Knew Some Day I'd Fight Kimbo Slice 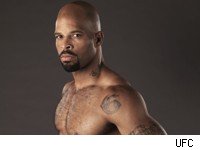 Houston Alexander, the hard-punching brawler with a 9-4 professional MMA record, has finally, after much discussion, been officially announced as Kimbo Slice's opponent on Saturday night's Ultimate Fighter Finale. And Alexander says he has long believed that a fight with Kimbo is a fight he's destined to have.

Alexander said that he thinks he's a natural opponent for Kimbo and that he expects a furious battle with him in the Octagon.

"I'm going in there with that frame of mind," Alexander said. "Hey, this is war."

But Alexander added that he has no personal animosity toward Kimbo, whom he says he hasn't met but has heard good things about.

"He's a father like me, has kids like I do," Alexander said. "He's making money doing something he loves, and from what I've heard he's a nice person."

Alexander took the UFC by storm in 2007, knocking out Keith Jardine and Alessio Sakara in his first two fights and needing less than two minutes, total, to do it. But he lost his next three UFC fights and took a year off before winning a fight in a small promotion earlier this year.

Alexander's weakness has always been his ground game but he said that's not the case anymore.

"I've been practicing every aspect of the game -- In order to be an MMA fighter, you have to practice every aspect of MMA, concentrate and drill, drill, drill," Alexander said. "When your kids come to wake you up and you start choking out your kids, that's when you know you have it right. ... My jiu jitsu has gotten a lot better. My grappling has gotten a lot better. I want to be a complete MMA fighter."

Alexander agreed to the fight at a catchweight of 215 pounds: Lighter than the 230 Kimbo usually weighed in at, but more than Alexander's typical 205. He said he's fine with taking on the burlier Kimbo at 215 and won't have to cut anything to make weight.