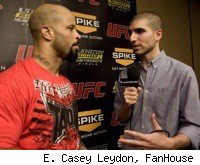 LAS VEGAS -- Much has been made of the fact that Kimbo Slice needs a big victory to regain some momentum in his MMA career, but in some ways, his opponent on Saturday at the The Ultimate Fighter Finale, Houston Alexander, may actually need the victory more.

Prior to winning on a local Adrenaline MMA show in September, Alexander had lost his last three UFC fights in a row, and a loss to Slice this weekend could spell the end of his UFC career. FanHouse spoke to "The Assassin" about keeping his UFC career alive and getting an opportunity to fight one of the most famous figures in the sport. The video interview is below.