Frankie Edgar Not a Fan of MTV's 'Jersey Shore' 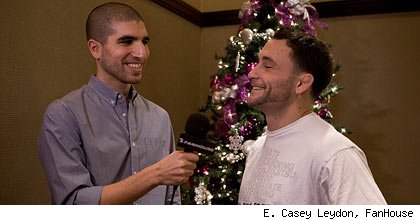 LAS VEGAS -- Frankie Edgar is one of the more soft-spoken fighters in the UFC, but if you want to rile him up just mention MTV's new reality show, Jersey Shore. Edgar, who hails from Toms River, N.J., told FanHouse on Thursday at The Ultimate Fighter Finale media workouts that he doesn't like to be compared to the stereotypical New Jersey partygoer portrayed on the show.

Edgar also talked about facing Matt Veach on short notice this Saturday night and his place in the UFC's crowded lightweight division. The full video interview is below.