Comcast's Impending Acquisition of NBC Could Cause Waves in MMA World 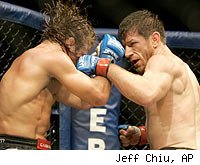 If the rumored deal marrying NBC to Comcast comes to fruition, it will create the country's largest media company, with over $51 billion in annual revenue.

And interestingly, such a scenario could also have an effect on the growing presence of mixed martial arts on television.

Whether that effect is positive or negative will ultimately depend on several variables, from who's in charge, to the new strategic direction behind the company's combined sports properties as well as other factors.

While there is little clarity to what might happen, we do have a few clues. According to The New York Times' "Deal Book" financial news blog, if the deal goes through, Comcast's Versus sports network will be turned over to NBC and would likely be overseen by Dick Ebersol, the chairman of NBC Universal Sports.

Why would that be significant?

Ebersol, who has run NBC's sports division since 1989, has at least historically not been a fan of mixed martial arts.

I worked at NBC Sports from 2006 to early 2009. During that time, there were at least a handful of sports executives that had interest in exploring the idea of putting MMA on the air. Ebersol, however, was not one of them. Eventually, however, Strikeforce inked a deal to broadcast MMA on late-night Saturdays, but the deal was brokered through the NBC Entertainment division, not NBC Sports.

Shortly afterward, I asked a high-ranking NBC Sports executive why the deal was approached in that regard. He explained that it was Ebersol's preference not to broadcast MMA under the NBC Sports banner. Though not explicitly stated, the inference was that he considered the sport too low-brow for NBC Sports standards. It was hardly surprising; most of NBC Sports' offerings veer to the traditional and genteel side, such as golf, tennis, Notre Dame football and the Olympics. (As a side note, Bellator's recently announced deal with NBC was also struck through the Entertainment division.)

Of course, to be fair, Ebersol and other NBC Sports executives who have been resistant to MMA in the past could have very different philosophies on what's acceptable for cable TV as opposed to network TV. Perhaps he wouldn't be as opposed to the sport if it aired on a channel in which he had less sentimental attachment, and which was not seen as the company's premier viewing destination. Another possibility is that the sport's continued success has changed some minds in the last 12-18 months, and that MMA is now seen as an increasingly valuable sports property.

Either way, if Ebersol does take the reigns of the new NBC/Comcast sports department, he is going to inherit MMA. As FanHouse reported on Wednesday, the WEC confirmed that a new extension has officially been signed with Versus.

Given that it's unlikely that Versus -- even under new management -- would break a newly signed deal, there is the chance for a very positive relationship emerging. The Times' piece suggests that Comcast will use Versus to challenge ESPN for sports cable supremacy and perhaps rechristen the channel with a name like NBC Sports Cable to give it a stronger brand presence. The WEC has generated some of Versus' best ratings over time, and could take on added importance in such a scenario.

A legitimate content war between the goliath ESPN and the suddenly deep-pocketed Versus would have the two vying for top properties across the sports landscape. And because NBC/Comcast's channels will feature both Bellator and the WEC, it might suddenly make more sense for the executives at ESPN or FOX to welcome UFC into their sports lineup. No one will want to be left out of the party, especially with the best dance partner still available. In that instance, Zuffa would emerge a double-winner. It may sound far-fetched, but Zuffa has had at least preliminary talks with both networks in the past, and an NBC/Comcast merger is nothing short of a declaration of war in the TV business.

With MMA's growing global audience, proven ratings success and attractive demographics, the sport is positioned to be a bigger player in the TV game at the start of the next decade. The NBC/Comcast megadeal won't necessarily expedite that process. It is, however, something to keep an eye on if and when it is finalized.