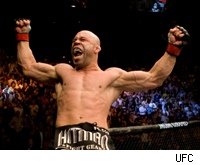 UFC President Dana White has consistenly spoken about bringing his organization to the world and having it surpass soccer as the world's most popular sport.

While the latter of those goals remains a distant objective, at least White now has evidence that the organization's plan to go international has made a slew of new fans around the world.

In Google's recently released 2009 year-end Zeitgeist, the UFC was named as the No. 3 fastest rising sports search around the world, trailing only the Real Madrid soccer team and "US Open" (it did not specify whether the search term referred specifically to either golf or tennis).

That top-five distinction is certainly something to be proud of for the UFC when you consider the fact that according to comScore, which is the global leader in digital search information, Google.com draws more than 100 billion searches a month worldwide.

That's a huge global audience searching for a vast variety of different things, so to be among the leaders in the sports category just shows the impact the UFC's marketing and live event businesses have had in making the brand a household name, even in places where it still relatively new.

The UFC ran 20 live events in 2009, including five international events, which took place in the UK (twice), Ireland, Germany and Canada. Next year figures to add to the company's international presence, as February's UFC 110 is scheduled to be the company's maiden voyage to Australia. In addition, White has openly talked of hosting events in Dubai and Mexico in the near future, with the Philippines and Italy also mentioned as possible sites.