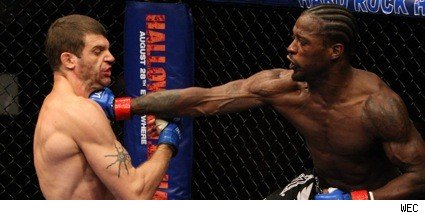 On this week's edition of The MMA Hour, we were first joined by Strikeforce middleweight fighter Matt Lindland. "The Law" talked about what led to him signing with Strikeforce, facing the dangerous Jacare Souza on Dec. 19, and his rocky relationship with the UFC.

Later in the show, we talked to WEC lightweight fighter Ed Ratcliff about his main event fight against Donald Cerrone at WEC 45 also on Dec. 19. Ratcliff discussed his unique nickname ("9mm"), fighting in his first WEC main event and training with Ken Shamrock earlier in his career. Finally, MDS joined us to preview Saturday night's The Ultimate Fighter Finale event on Spike TV and Kimbo Slice's MMA future. Watch or listen to the show below.