The K-1 World Grand Prix 2009 is the year's biggest kickboxing event, and as we get ready for the December 5 show, we have K-1 announcer Michael Schiavello offering his commentary on each of the fighters. His thoughts on Semmy Schilt are below. 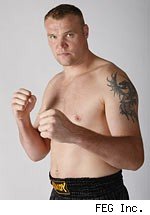 There is a good reason why Semmy Schilt is dubbed the most "powerful" champion in K-1 history. The High Tower from Holland is K-1's tallest Grand Prix champion ever and his three year reign between 2005 and 2007 was the stuff of nightmares both for opponents and for the K-1 Corporation.

Schilt's three consecutive Grand Prix victories between 2005 and 2007 was unprecedented and his victories in each Grand Prix looked easy bar a Brazilian kick from Glaube Feitosa that rattled him momentarily in the 2007 final. Despite Schilt's in-ring achievements, he failed to endear himself to fans and was often blamed as a big part in K-1's falling live crowds and TV ratings during this three-year period.

In 2008 in Seoul, it took a superhuman performance from "Mr. K-1," Peter Aerts, to prevent Schilt from entering a fourth consecutive Grand Prix tournament and going for Ernesto Hoost's record.

After a shaky start to 2009 in which he was obliterated by Badr Hari in under one minute in Amsterdam, Schilt finally found his rhythm with a monstering of Daniel Ghita in Seoul at the Final 16 and an easy decision win over Alexey Ignashov at Ultimate Glory in Amsterdam to raise his stock and make him a genuine threat once again for the greatest fight title on the planet.

Schilt certainly seems focused for a fourth Grand Prix title and has said in interviews that the three previous crowns do not collectively mean as much as getting a record-equaling fourth. Indeed there is one fact we must pay attention to in particular when it comes to Schilt: he has NEVER lost a tournament. He participated in three K-1 Grand Prix tourneys and won them all, and also won the 2005 K-1 European Grand Prix in Paris. This makes Schilt one of if not the most effective tournament fighter in K-1 history. In other words, High Tower knows how to win tournaments and the exact physical and mental output required to run the world's most grueling gauntlet.

What is it about Schilt that makes him such a dangerous fighter? Height is the first answer. While there are many tall fighters doing the rounds it is a skill altogether to be able to know how to actually fight as a tall fighter. This is something Schilt does to perfection. He never shrinks himself. He knows his height is his major asset and he exploits it brilliantly, sitting behind the two basic weapons every tall fighter should have perfected into their arsenal: the jab and the front kick (push kick, mae geri, teep kick). Schilt's jab is astronomically powerful, so much so that he used it to become the first man in K-1 to ever knockout Ray Sefo cold. His front kicks are devastating in the way that he uses them defensively to keep opponents at bay and offensively to dig the ball of the lead foot into an opponent's midsection – a technique any of Schilt's opponents will tell you is hellishly painful.

Get on the inside of those two range techniques and Schilt is able to bring his knees into play. And once again these aren't tip-tap knees – they are smashing balls able to knock opponents out. Just ask Paul Slowinski or Glaube Feitosa!

The last part of what makes Schilt such an imposing fighter is his tremendous cardio and work rate. At 294 pounds and 6-foot11, it constantly amazes me that Schilt never seems to tire. Indeed his output of technique is equivalent to that of a light heavyweight. He is always on you, always coming forward and always throwing. In short, he is a machine.

A fourth K-1 Grand Prix crown is well within Schilt's sights this year. He is refocused and at the Final 16 in Seoul gave as a glimpse of a new and even more brutal Schilt who will be hard to stop.

FAST FACT
Semmy Schilt is the only fighter in history to have competed in K-1, PRIDE, UFC and Pancrase. He is a former King of Pancrase, competed in two UFC events and in seven PRIDE shows. His last MMA fight was a triangle choke win over Mighty Mo at Dynamite last New Year's Eve.