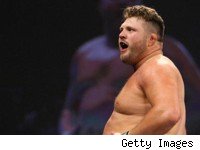 Roy Nelson will meet Brendan Schaub in the finals of The Ultimate Fighter 10 Finale this Saturday in Las Vegas.

The two heavyweights won their respective semifinal bouts during the final hour of Wednesday's last two taped episodes of the season.

Nelson and Schaub entered the night's episodes already slotted in the semifinals from wins in the previous two episodes against Justin Wren and Jon Madsen, respectively. The two were awaiting the results of the remaining two quarterfinal fights between James McSweeney vs. Matt Mitrione and Marcus Jones vs. Darrill Schoonover.

On the first hour of Wednesday's episode, McSweeney tapped out Matt Mitrione with a guillotine choke and Jones knocked out Darrill Schoonover with punches inside of Schoonover's guard.

But the two would fall to the favorites Nelson and Schaub in the second hour. Nelson stopped McSweeney with punches in the crucifix position, while Schaub knocked out Team Rampage's lone representative with punches on the ground.

After the loss, Jones announced he would walk away from the sport to avoid putting his family through the potential stresses of watching him lose. But true to the nature of retirements in sports, Jones' retirement was short-lived. He'll be fighting this Saturday against Mitrione.