With Benji Radach Out, Trevor Prangley Being Considered for Robbie Lawler 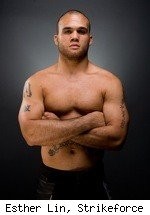 The long-rumored middleweight fight between Robbie Lawler (16-5) and Benji Radach will not be happening at the upcoming Strikeforce show on Dec. 19 because Radach could not get medically cleared for the fight. So with less than three weeks to go before fight night, the organization is now looking for an opponent to fill out the five-fight televised card.

And while no opponent had been signed as of Tuesday afternoon, FanHouse has learned that veteran Trevor Prangley (22-5) is a leading candidate to face Lawler on the show.

If Prangley vs. Lawler ends up happening, it would mark the South African's second fight in less than a month, as he defeated Marcus Sursa this past Saturday via first-round rear-naked choke at Shark Fights 7. The win was Prangley's fifth in a row and 11th in his last 12 fights. He last fought for Strikeforce on their September 2008 show at the Playboy Mansion, defeating Anthony Ruiz via uanimous decision.

Lawler is coming off a first-round submission loss to Jake Shields in his Strikeforce debut. The former EliteXC middleweight champion had been on a six-fight unbeaten streak prior to the loss.

FanHouse has also learned that veteran David Loiseau was briefly considered as a possible opponent for Lawler, but it doesn't appear as though he will get the shot. The organization hopes to finalize the bout by this week.

Lawler's agent, Monte Cox, was unavailable on Tuesday to comment on the bout.

Already confirmed for "Strikeforce: Evolution" is a lightweight title rematch between champion Josh Thomson and interim champion Gilbert Melendez, Cung Le vs. Scott Smith and Matt Lindland vs "Jacare" Souza. The event airs on Showtime from the HP Pavilion in San Jose, Calif.

Update: On the Tuesday edition of The Fight Show on Sirius radio, host Mauro Ranallo also threw Melvin Manhoef's name into the mix as a possible opponent for Lawler. Stay tuned.