Matt Hughes Could Return in April 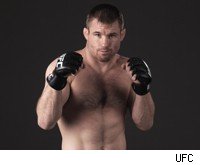 Matt Hughes has received word from the UFC that his return could happen at a yet-to-be-announced UFC event on April 10, 2010.

"I'll tell you later who and where when I find out for sure if it is confirmed," the 36-year-old former UFC welterweight champion wrote Monday evening on his official blog.

Hughes' fighting pace has slowed since losing for the second time against titleholder Georges St-Pierre at UFC 79 in December 2007. Since, he's only fought once a year, losing to Thiago Alves in 2008 and beating Matt Serra this past May.

Hughes put an end to retirement thoughts in September when he signed a new multi-fight deal with the UFC.

Renzo Gracie is headed to the UFC and has been rumored as an opponent for Hughes.