MMA Fighter Married in the Cage 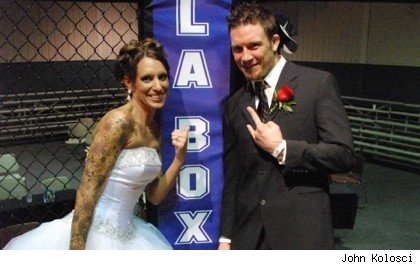 For fighters, the steel cage is an outlet to express their passion towards martial arts and competition. The Ultimate Fighter 6 cast member John Kolosci has gone a step further, taking the setting to celebrate a more traditional type of love: Romance.

Kolosci, who holds an overall MMA record of 12-6, tied the knot with fiancée Cathy Landeros on Nov. 20 at a ceremony inside the cage at the inaugural Hoosier Fight Club mixed martial arts event in Valparaiso, Ind.

"Our entire lives are surrounded by MMA, so this seems like the perfect setting," Kolosci told FanHouse.

A year ago, Kolosci left a six-figure job in the computer industry to pursue MMA as a full-time career. He currently trains, teaches and competes in MMA as well as managing fighters. In addition, Kolosci recently added matchmaking to his resume for the new promotion. While his wife has left the actual fighting to Kolosci, she assists him with his commitments with the Hoosier Fight Club. 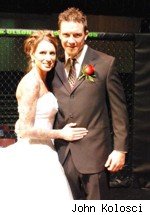 "She does not train MMA. She's a typical girl that likes to punch me, but doesn't like to get punched back," Kolosci jokes.

Kolosci and his wife relished the eccentricity of the unique site. They were introduced during intermission as if they were the "ninth fight of the evening" and led down to the cage to their separate red and blue corners; however, instead of throwing down, the two exchanged vows.

"We thought it was absolutely awesome," Kolosci said. "Everything went smoothly and without a hitch. Everyone that was there complimented us on how cool it was. We even had Here Comes the Bride played live by electric guitar."

They've been together so long that he felt nothing similar to the so-called "UFC jitters" that a fighter feels upon making his UFC debut.

"Not much, I wasn't nervous at all. We've been together seven years and living together six-and-a-half years, so life isn't changing much, except for the fact that Cathy can now be call Mrs. Kolosci. She's ecstatic about it."

The two met through mutual friends and Kolosci claims she initially turned him down about 100 times. Then the two ran into each other six months later and became sweethearts ever since.

Cynics may find it hard to believe, but the ceremony inside the cage was more than a mere stunt; Kolosci and his bride have no plans to stage a more traditional ceremony afterwards.

"No traditional ceremonies," Kolosci said. "That's exactly what I've been trying to avoid since day one. We are not traditional at all. It wasn't a crazy ceremony with tons of 'things to do. We just walked down and got married. Very simple, just like we like it."

Kolosci's family and friends were all very receptive to the idea and thought it was unique. More importantly, the Koloscis were the happiest pair in the room.

"She loved it and could not be happier," Kolosci said. "Everything went as planned and the most important thing to her is that we are legally married now. We are both a very, very happy couple."

Kolosci fought on the Strikeforce: Fedor vs. Rogers undercard earlier in the month and will next fight on a card on Dec. 1 in Costa Rica.