The K-1 World Grand Prix 2009 is the year's biggest kickboxing event, and as we get ready for the December 5 show, we have K-1 announcer Michael Schiavello offering his commentary on each of the fighters. His thoughts on Jerome Le Banner are below. 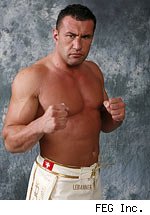 Always the bridesmaid and never the bride is a term often used to describe the K-1 career of the sport's most popular commodity, Jerome Le Banner. 2009 will be the Frenchman's eleventh K-1 Grand Prix appearance and at 36 years old maybe one his last chances to capture that most elusive of crowns.

Le Banner has twice reached the final of the Grand Prix, first as a phenom in 1995 when he lost to a rampaging Peter Aerts, then in 2002 when, little more than one minute away from winning the crown, he took an Ernesto Hoost kick to his forearm that shattered the bones and won Hoost a record fourth crown. Le Banner took a trip to the hospital where a steel rod and eleven pins were inserted into his shattered arm. Many fans would argue that The Battling Cyborg has not been the same fighter since.

Renowned for having one of the highest knockout ratios in the history of combat sports – 32 knokouts in 47 K-1 wins), Le Banner was once the most feared and ferocious heavyweight on the planet who captured the imagination of K-1 fans worldwide with his electrifying brand of take-no-prisoners knockout fighting. It would seem however that Le Banner's legendary knockout power has dried up with five of his last six wins coming via decision and just the one knockout in three years when he floored the dismal Yong Soo Park in 2007. Without his fabled knockout power, what then does Le Banner possess to put him in contention for the coveted K-1 crown in his eleventh attempt? The answer is experience.

Along with Peter Aerts, Le Banner is the most experienced active fighter in K-1. There is nothing he doesn't know how to do in center ring, and his footwork and output remains high, a testament to his extraordinary cardio. A training demon with military-like discipline, a fit and focused Le Banner remains very much a threat even if his knockout power seems to have disappeared.

In the tournament's third quarter final Le Banner faces former three-time champion Semmy Schilt. This will be the fourth time the two have fought, with Semmy winning the previous three encounters. It is the most recent of these matches – their 2008 Super Heavyweight title fight in Fukuoka – that we must pay attention to. On that night it was Schilt who retained his title with a decision win – a result protested by both myself and Ray Sefo on commentary that night. In what was one of Le Banner's best performances of the last three years, he beat Schilt to the punch, took Schilt's best shots and frustrated Schilt with fast hands, solid inside leg kicks and great footwork. If Le Banner uses this same blue-print on December 5, and adds a little more starch to his punches, he could very well cause a major upset and find himself in the semi finals.

FAST FACT
Jerome Le Banner is K-1's most famous southpaw (left-handed) fighter even though he is naturally right-handed! Le Banner began fighting as a southpaw early in his career and decided it felt more comfortable so he stuck with the left-handed stance, even though he a right hander. This has been one of the secrets to his high KO ratio over the years: the fact that he can hit opponents with equal strength off both hands.