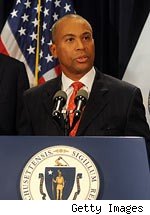 Massachusetts Gov. Deval Patrick on Monday signed into law a bill regulating mixed martial arts, making it a near certainty that the UFC will host an event in the Bay State sometime in 2010.

Patrick's signing comes just one month after a bill on the sport sailed through the state's House of Representatives.

The bill will replace the current state boxing commission with a newly expanded State Athletic Commission that oversees all combat sports.

According to the text of the bill, the state will reap four percent of revenue for ticket sales and two percent from televised events.

The UFC has all but promised to bring an event to the Bay State -- specifically Boston -- shortly after sanctioning; UFC President Dana White lived in the city for much of his youth and has spoken enthusiastically about staging an event there, even mentioning the possibility of using the fabled Fenway Park as a venue. The TD BankNorth Garden, however, is a more likely candidate to host a show.

White, clearly ecstatic at the news, tweeted, "Here we come Boston!!! NY is next!!! Outstanding news."

Massachusetts boasts a thriving MMA scene and is home to fighters including Kenny Florian, Gabriel Gonzaga, and the Lauzon brothers, Joe and Dan. Several promotions currently run events in the state, but have not been subject to any athletic commission regulation since 2005.

New York remains the last holdout among major states to sanction MMA, although a bill to regulate the sport was passed in a key Assembly committee in 2009 before internal Senate turmoil prematurely ended the session. The bill is believed to have an excellent chance to pass in 2010.