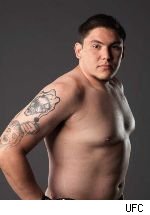 Darrill Schoonover, a cast member of the current season of The Ultimate Fighter, has been called back to active military duty in the U.S. Army, and will have to report shortly after his Dec. 5 fight on the TUF finale.

Schoonover, who previously served four years in the Army, believes he may be called to serve in Afghanistan, according to an interview he conducted with Shambala Sports Radio.

"At first I was kind of pissed," he said. "I was like, 'I've already served my country for four years and been out for almost two years.' I'm getting my fighting started and getting the ball rolling on that. I was kind of mad, but the very next day, I just accepted it. I'll do what I gotta do, and then I'll come back and work on my fighting."

Schoonover added that he will have to serve a 400-day stint, and that he hopes to use the time to lose weight, which may make possible a move down to the light-heavyweight division.

The 24-year-old Texas heavyweight had a perfect 10-0 record before being chosen for the Ultimate Fighter.

During the show's season, which is currently broadcasting, he became the focus of several episodes after a series of confrontations with opposing coach Quinton "Rampage" Jackson. Inside the octagon, he defeated Zak Jensen in the tournament's first round, and will fight former NFL player Marcus Jones in a quarterfinal matchup that has yet to air.