Badr Hari: Most Exciting KO Artist Ever to Step in the K-1 Ring

The K-1 World Grand Prix 2009 is the year's biggest kickboxing event, and as we get ready for the Dec. 5 show, we have K-1 announcer Michael Schiavello offering his commentary on each of the fighters. His thoughts on Badr Hari are below. 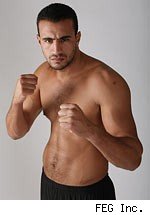 Arguably the most exciting knockout artist to ever step inside the hallowed K-1 ring, Badr Hari is a young man with the world at his feet who finally seems ready psychologically and physically to capture the crown experts have prophesized would be his since his teenage days.

When he was just 18, Hari's then trainer – the great Thom Harinck of Chakuriki Gym – proclaimed that a teenage Hari had more talent than Branko Cikatic and Peter Aerts combined. While Hari has showcased his enormous repertoire of dynamic technique since his K-1 debut in 2005 at the Tokyo Dome (where he knocked out Stefan Leko with a spinning hook kick to the head), he is yet to acquire the coveted Grand Prix title not for a lack of skill or physical strength but for a lack of mental potency.

In 2008 after knocking out Peter Aerts and then Errol Zimmerman in stunning fashion in his run to the final, Hari had a complete meltdown against Remy Bonjasky and handed Bonjasky his third GP crown.

"I basically gave him $400,000 and the title," said Hari. "I made a mistake. I still don't know what I was doing. My mind just goes a hundred miles an hour, you know, and I just did something really stupid. It won't happen again."

Once again Hari is poised as the favourite to take the GP crown this year. He will enter the Yokohama Arena on December 5 with two wins in 2009 over Semmy Schilt and Zabit Samedov who collectively lasted no more than three minutes in the ring with Hari. Indeed Hari's win over triple GP champion Semmy Schilt in May in Amsterdam was 45 seconds of violence the likes of which we have never seen before. Schilt, K-1's most powerful champion ever, was handled like a play toy as a ferocious Hari exploded out of his corner and knocked out the 6' 11" Hightower from Holland with a right cross gifted from the Gods.

On September 26 in Seoul Hari main-evented against K-1 European Champion Zabit Samedov. Again Hari made short work and became the only man to knockout the elusive Samedov when he sunk a single right hand to the stomach that floored the Belarussian and booked Hari his third Grand Prix appearance.

The Hari who will enter the ring on December 5 seems to have exorcised the demons that ravaged his past. Under the tutelage of father-figure trainer Mike Passeniere, and with the calming influence of main training partner Melvin Maenhoff, Hari's preparations are on target to finally achieve his destiny. His time spent in Morocco earlier this year as a special guest of the Moroccan King helped Hari to put his life into perspective and realize what an inspiration he is to millions.

"That was a great experience," he says of his time in Africa. "The people there were so nice and they had so much belief in me, it really helped me relax, center myself and get focused to do what I have always said I would do: become the K-1 champion."

FAST FACT
Badr Hari and Ruslan Karaev have fought twice before for one win apiece. In 2006 in Osaka it was Karaev who won a controversial TKO in the first round. In March 2007 Hari got his revenge in stunning fashion when after being knocked down in the second round, he threw just one right cross off the recommencement of the bout and knocked Karaev out cold.