Vera-Couture Decision Another in Long Line of Controversies 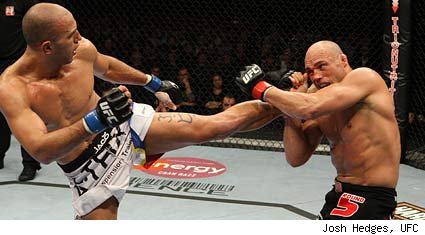 Randy Couture left the octagon on Saturday night a winner.

It should be cause for celebration. It should be yet another transcendent chapter in an epic tale.

It is not. Instead, it is another in the long, recent line of controversies.

After three hard-fought rounds at UFC 106, Couture was awarded a unanimous decision victory, with all three ringside judges scoring the fight 29-28 for the legend over his opponent, Brandon Vera.

The problem was, Couture (17-10) didn't win. At best, he earned a draw. More likely, he lost. Long story short: the judges erred again.

To be fair, Vera (11-4) didn't exactly blow anyone away with his performance. He fought Couture to a stalemate in the first, decisively won the second, and eked out the third. He may receive the same criticism for his performance as the judges do for their decision. Many will say he wasn't aggressive enough. Others will say he had a flawed game plan. But he was fighting Randy Couture. He was fighting one of the most experienced and craftiest fighters alive. He had plenty to think about.

Vera stopped most of Couture's takedowns. He landed the only damaging blows of the fight. He knocked Couture down. He earned a takedown of his own and moved to the full mount.

Aside from an early clinch flurry in the third, Couture's main offense consisted of closing the distance, holding Vera against the cage, and searching for a way to take him down. As executing game plans go, you can't say he was successful in doing anything but slowing Vera down. You can say he dictated the tempo. You can say slowed the pace. You can't say he hurt or even rattled Vera.

There was one takedown (Vera returned to his feet in nine seconds). There was no ground-and-pound. There was little dirty boxing. There were no power strikes landed from a distance.

This wasn't one that was especially hard to score.

The judges scored the first round for Couture. I'd just like to know why? Couture spent almost the entire round in a futile clinch (4:34 of the round, according to FanHouse's unofficial count). He finally took Vera down, but couldn't even hold him there for 10 seconds. He didn't land a single power strike in the round. What did he do to win the round?

FanHouse unofficially counted the landed strikes as 7-7. Couture's takedown was nullified by Vera's rapid escape. Neither man could get any real offense started, and it should have been a 10-10 round. Couture supporters will object, saying he exhibited "octagon control," but failed takedowns do not constitute any type of control, and neither do they deserve a reward.

Largely on the strength of a knockdown and a sizeable edge in landed strikes, the second was clearly Vera's, and the judges agreed. So after two rounds, it was all tied with five minutes to go.

Couture started the third strong with an early flurry against the cage, then clinched Vera. Midway through, Vera escaped, and connected with a body kick, then a head kick. Couture initiated a pair of clinches in the final two minutes. Vera broke free from one, then surprisingly, took Couture down on the other. With 45 seconds left, he advanced to mount, a dominant position, before briefly taking his back (these dominant positions can effectively be characterized as "octagon control"). Couture eventually escaped.

FanHouse unofficially gave Couture an 11-10 advantage in strikes in the third, but Vera the edge in power punching, scoring the most significant blow of the round with a knee to the body. And this time, it was Vera getting the takedown. So here's my biggest issue with the decision: If the judges gave Couture the close first round because of a takedown as the decisive factor, shouldn't the close third have gone into Vera's column for the same reason?

"You just never know. You never know what the judges are looking at when they make the decision," Couture said afterward. "Brandon's a hell of a fighter. He had to dust off his wrestling skills for this one and he definitely did a great job."

Over and over, we hear the same thing: don't send it to the judges. The judges are not perfect, and they certainly have a thankless job that most would want no part of, but the fact is that they accepted the responsibility and so must be open to criticism and questioning. Last month it was Rua-Machida. This time, it's Couture-Vera. Who will be next?

"I'm pissed, I'm really pissed," said a perplexed Vera. "In this sport, there is a saying, 'If you let it go to the judges, anything can happen.' I should have finished him. I had a great opportunity. I thought I won."

Randy Couture is a legend. He's an MMA superstar. He will always be considered one of the pioneers and building blocks of the sport. But he left the octagon Saturday night with something that wasn't his. He worked hard, but didn't do enough. Vera landed more strikes, stuffed Couture's repeated takedown attempts, and scored the more damaging blows, including a knockdown. He left with the better statistics, the highlight moments, and the crowd's sympathy. Everything, it seemed, but the most important thing: the win.