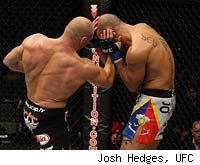 In a surprising unanimous decision, three judges in Manchester, England gave Randy Couture a UFC 105 victory over Brandon Vera after a fight in which Vera did most of the effective stand-up striking.

Vera was shocked after the decision was announced.


Couture said afterward that he thought he deserved the decision because he controlled Vera.

"I controlled a lot of the tempo of the fight. It probably wasn't the most exciting thing to watch, but Brandon is dangerous. He kicked me twice in the body and that hurt."

Vera came out very fast and landed a punch and a kick immediately after they touched gloves, stunning Couture and appearing to hurt him. But once Couture recovered, he was able to hold Vera against the fence, take him down once, and generally stalemate him through an exhausting but ultimately uneventful first round that I scored for Vera, 10-9.

The second round started with Vera unintentionally kicking Couture in the groin and poking him in the eye simultaneously, forcing Couture to take a moment to recover. After that Couture was able to grab hold of Vera once again, but when the referee separated them, Vera landed two powerful kicks and a hard punch, badly hurting Couture and knocking him to the ground. Couture was able to tie Vera up in his guard and force a stand-up, but that just allowed him to survive the round, not win it: Vera definitely won the second.

Early in the third round Couture landed a good combination of punches and appeared to have Vera reeling, but when Couture went for a takedown and couldn't get it, that gave Vera time to recover. The referee eventually separated them from a clinch against the cage again, and at that point Vera landed some more powerful body kicks. Late in the third Vera got a takedown and got into mount, and although Couture got back up and finished the fight swinging, I gave the third to Vera, 10-9.

The 46-year-old Couture looks like he's showing his age, but he still convinced the judges that he won, and he improved his MMA record to 17-10. Vera falls to 11-4.

Randy Couture tries to take down Brandon Vera at UFC 105 on Saturday, November 14, 2009 in Manchester, England.

Brandon Vera looks to attack Randy Couture after knocking him down at UFC 105 on Saturday, November 14, 2009 in Manchester, England.