Dan Henderson Says He Has Not Signed With Strikeforce Yet 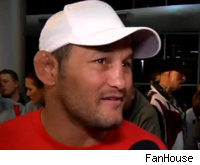 HOFFMAN ESTATES, ILL. -- Dan Henderson is in town to corner Rameau Thierry Sokoudjou in his fight against Gegard Mousasi on Saturday night, but the free agent told FanHouse on Friday that he will also talk to Strikeforce officials about possibly fighting for their organization in the near future.

Henderson refuted a recent Yahoo! Sports report which stated he had already signed with Strikeforce and also said that he has not closed the door on re-signing with the UFC. Check out the video interview below.