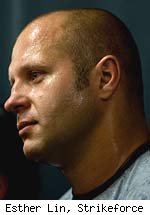 Taking some time out of his preparation for his Strikeforce/M-1 Global fight against Brett Rogers on November 7, Fedor answered FanHouse readers' questions about how he prepares for his fights, who his toughest opponents are and why he's sticking with Strikeforce and M-1 Global instead of signing with the UFC.

The questions and answers for Fedor are below.

AlexJBerkman Has he changed his training to prepare for his first fight in a cage? And if so how?
No, the training is the same every day. We made some incremental adjustments for the cage.

antoinefafard: Question for Fedor: Is your training the same every day or do you sometimes focus more on certain aspects of the game?
In general the training is the same but the week is divided in training sessions during which we focus on one aspect of the game: wrestling, striking, et cetera.

RhythmSignal: Fedor seems to challenge opponent's strengths (ground Nogueira & Coleman-standing up Arlovski & Crocop). Is this intentional?
When you know the opponent's strength you put an emphasis on it when preparing for the upcoming bout. My ground skills were good before the bout against Antonio Rodrigo Nogueira because I have the judo and sambo background. For the fight against Mirko Cro Cop Filipovic, we went to the Netherlands, where I trained the stand-up with the best strikers.

Carl_Hnatiuk: Fedor, Strikeforce has a few decent heavyweights, but after a few main events, what does the future hold for you in Strikeforce?
We'll see. At the moment I'm content with what M-1 and Strikeforce has to offer. My contract is for three fights so we'll see after that. I take one fight at a time.


dustinriddell: After Brett Rogers who else would be a good opponent for you?
There are several top fighters in Strikeforce and M-1 now, and keep in mind that a year is a long period. A new top opponent might emerge. At the moment there is Brett Rogers, Fabricio Werdum. Of course there is Alistair Overeem, the Strikeforce heavyweight champion. Antonio Silva will fight Werdum on Nov. 7 during the same Strikeforce / M-1 Global event I fight. There are free agents like Josh Barnett and Andrei Arlovski. There is enough challenge for me out there.

JohnKrolik: You've said Cro Cop gave you the toughest fight of your career. Why do you think he's struggled in the UFC?
I think it has to do with motivation. He had won the Pride Grand Prix in 2006 and maybe he needed to have a rest after such a big accomplishment. I don't know but I hope he will be alright.

joelmclaughlin: I'd like to know if he's ever thought about (and if he's attempted) making a cut to 205.
No, I've never attempted it and I don't see the point of making such a cut in my case.

sir_roc_obama: The question I have for fedor is the question EVERYBODY has for fedor - why didn't you make the deal happen with UFC?
The conditions offered by the UFC were not good enough. There were many points both parties were OK with, but at the same time, there were some sticking points that were not resolved. I'm 100% satisfied with what Strikeforce could offer me and my company M-1 Global. We talked to them and I like their style, behavior and the way they treat people with respect.

ThePatBurke: When will Americans be able to see Aleksander, your brother, fight in the US?
I think Aleksander himself should answer this question. He is on his own right now -- managing his own career now -- so I can't say definitely about that.

neyvit: Fedor, what do you think is the ideal # of fights per year at this stage in your career?
About three fights a year.

Resnicno: : I'd like to know who are his favorite fighters and if he's still thinking about an UFC debut in the future
I like watching Gegard Mousasi fight. He fights smart.

MTFIII - Ask him if he's a fan of other sports, and whether he has met, or would like to meet, other Russian professional athletes.
When I have some free time, I like watching sports. Last year, I was honored to bear the Olympic torch with many other prominent Russian athletes. Also when I come to Moscow or St. Petersburg I meet professional athletes occasionally.

beewsee: How much longer does Fedor plan on fighting?
I can't predict the future. All I can say now is that I enjoy doing it today.