Thiago Alves Out of UFC 107 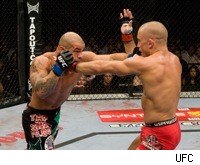 A knee injury has forced welterweight Thiago Alves to pull out of his scheduled bout against Jon Fitch at UFC 107. FanHouse learned of the news Friday morning.

The Alves-Fitch fight was put together late last week after Fitch's opponent at UFC 106, Ricardo Almeida, pulled out due to a knee injury as well. Alves was originally scheduled to fight Paulo Thiago at UFC 107, but once Fitch was left without an opponent, the UFC booked the rematch. No word just yet on who, if anyone, Fitch will be facing on the Dec. 12 show in Memphis, TN.

Alves suffered a torn posterior cruciate ligament while training. According to Alves' manager Dan Lambert, Alves will be out 3-to-4 weeks, and will be ready to fight on any show after Jan. 1. Lambert mentioned that Alves was ready and willing to keep the fight despite the injury, but his management team at American Top Team in Florida felt that it was in his best interest to sit this one out.

Below is a look at the updated UFC 107 card: